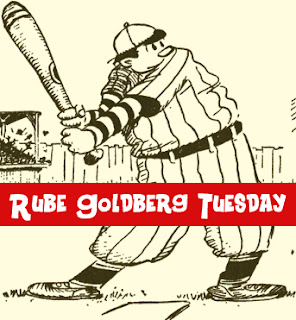 Join me every Tuesday for an exploration of the vast archive of terrific forgotten comics by the Father of Screwball Comics!

With the 2012 baseball season just over halfway done, here's three striking daily comics Rube Goldberg wrote and drew in 1930 on the subject of what one philosopher of the time called "America's national religion." These cartoons, over 80 years old, show that some things about baseball in America haven't changed.

The very term "screwball" originates from the game of baseball, referring to a pitch with a counter-intuitive trajectory that is is difficult to hit. None of today's Rube Goldberg baseball comics from 1930 reference the screwball pitch, but nonetheless, they themselves are great examples of screwball comics.

I suspect most readers coming to this post fresh from a Google search will be expecting to see a wacky chain-reaction invention related to baseball. Something like this inspired device for pitching a ground ball:


I'll share some links from the Rube Goldberg, Inc. website at the end of this post that will direct you to Rube's baseball cartoons with invention themes. Even though the 3 examples we have today, scanned from my own collection of paper originals and available nowhere else, are not invention oriented, they are still pretty great and show other sides of Rube's humor.

Like most early American cartoonists, Rube began his cartooning career drawing sports cartoons. Here's an example of a 1908 baseball cartoon by Rube (only the low res image is available):


By the time 1930 rolled around, Rube had about 25 years of experience in writing and drawing baseball cartoons. Our first example comes from A Sad, Sad Story -- one of Rube's many rotating daily series, and is a prescient commentary on the problems caused by the over-commercialization of the game:


The above strip also has some great comic drawings of a baseball player with baggy uniform and Rube's classic hot dog nose. Our next pitch is a neat, almost wordless sequence that works beautifully as a rare sequential cartoon in Rube's one-shot dailies:


Notice how, in the above comic, Rube draws each of the four scenes as freeze-frames, capturing the exact split-second the baseball touches the bearded gentleman's bald and increasingly bumpy noggin. By the way, lamp that huge funny beard -- shades of Gene Ahern's Little Hitchhiker from The Squirrel Cage!

My last scan for you today is a real humdinger. Every once in a while, Rube would draw a single image in the entire rectangular space allotted to his daily comic. Because he was drawing just one large panel instead of several smaller panels, Rube would often create a more elaborate, masterful rendering, with more detail and penwork. This strip, in addition to being a striking image, is also a wonderful comic about the enthusiasm that 1930s American boys felt for the game of baseball.


You can find several more of Rube's baseball cartoons in the online archives of the Rube Goldberg, Inc. website: