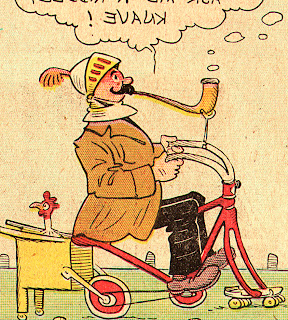 Why is a goat in your bed like lace curtains on fire? Here's a selection of early finds and nice color scans from my own collection of Gene Ahern's classic screwball comic, The Nut Brothers, which asked -- and answered such questions. (For the answer to the above question, see the February 14, 1932 episode of The Nut Brothers, re-published below).

Best known for creating the often less screwy Major Hoople and Our Boarding House, Gene Ahern was actually one of the prime exponents of screwballism in American comics. His Nut Brothers presented a seemingly inexhaustible river of symbols with dreamlike connections -- a knight's helmet, a modified bicycle, a chicken, a huge pipe emitting soap bubbles, and a roller skate are combined as skillfully as images in a Dali painting. The corniness of the strip's nickel-matinee-bottom-billing-vaudeville-act patter hardly matters and, in fact, becomes a meta comment on humor itself. There can be no doubt that Ahern's Nut Brothers was a prime inspiration for Bill Holman's Smokey Stover. Eventually Ahern's Nut Brothers developed into something even greater -The Squirrel Cage (and Foozland).

According to comics historian Allan Holtz:

You can see the full post, with additional information and examples of this strip at Allan's invaluable blog here.

The current Wiki article says The Nut Brothers fist appeared in Ahern's Crazy Quilt. Ger Apeldoorn has a few more details in his comment below.) Here's an example I've found, shoehorned into the magical mosaic of a 1922 daily comic page.

The following Nut Brothers are signed "Martin." This is probably Edgar (Abe) Martin a fellow NEA cartoonist-colleague probably assigned part of Ahern's workload as he developed what would become his most successful and best-known comic, Our Boarding House. Just two years later, in 1924, Abe Martin would create the long-running and popular comic strip Boots and Her Buddies (a comic concerned with women's fashions instead of screwballism -- although, come to think of it, perhaps there's a connection between the two, after all).


In late 1921, Ahern had a big hit with his new daily panel and color Sunday comic, Our Boarding House.

About ten years later, the comic strip syndicates got the bright idea to break a cartoonist's "page" into two strips, so that the client paper could then boast of a section having 32 comics, instead of just 16, for example. Most of these "toppers" were fairly slight throwaways. For Ahern, however, these were a place for him to explore and cultivate his talent for screwballism. For his second strip, Ahern brought back The Nut Brothers as a "topper" to Our Boarding House in starting October 25, 1931 (thanks to Allan Holtz and Carl Linich for that information). A paper scan of that first Sunday color Nut Brothers is below.


Just to show you what the entire page o' Ahern looked like, I've scanned the November 1, 1931 page, with Nuts at the top and Hooples at the bottom. Obviously, Major Hoople's adventure relates to that year's Halloween, which demonstrates one of the many ways Ahern found to work his surreal streak into the more mainstream, "reality" based comic.

In another post on another day, when I have more time available and more information on this comic, I'll offer a more informative essay on the strip. Foo now, here's a selection of color scans mostly from early 1932, when Ahern began to pull out all the stops and reach dizzying new heights of wackiness -- just for the sheer joy of it!

Ches and Wal also appeared as wacky inventors in the 1936-39 episodes of Ahern's comic, The Squirrel Cage. You can see a hint of what was to come in this in the episode below, about a wacky way to cultivate bonsai doggies..

In the next two strips below, there is some racism. It doesn't seem to be integral to the humor, but just one more surreal element in the mix -- and as such functions as a sort of dreamlike reshaping of racism.

Foreign Legion, American Indian, concert pianist, and Chinese philosopher -- all in one small strip. The concentrated dose of the dream of history offered by Gene Ahern's Nut Brothers can be overwhelming, at first, causing us to cling to the corny, gag-book jokes as if they were a raft in a whirlpool.

More on Ahern's masterful screwballism in future posts! Until then, I remain

Screwily Yours,
Paul Tumey, he said, sticking his bean out of a mailbox