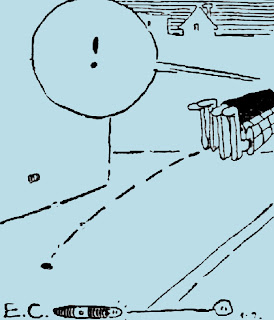 For these early strips, Segar kept his drawings simple and to the point. However, the strip is a sophisticated example of the art of humorous cartooning, much like Ernie Bushmiller's Nancy. Segar worked hard, and he was just plain great as a humorous cartoonist.

It was in the 1920's that Segar honed his craft. As you can see in these delightfully daffy dailies, he had an emphasis on screwball humor from the start. His strips sometimes end on flip takes, nutty behavior is the norm, and these little comics are packed with action and ideas.

Here's a nice little press biography of Segar that appeared in The Literary Digest, May 11, 1935.

The strips in this post are from Jan 1- Jan 14, 1920 -- some of the very first episodes of Thimble Theatre! You can see some of the beloved art elements used in the Popeye strips being brought into magical creation in these rare early comics. A few notes follow.

The original concept for Thimble Theatre was to present little parodies of popular movies and plays in serialized comic strip form. The imeptus for creating the strip was to replace Ed Wheelan's Midget Movies, which the syndicate had just lost when Wheelan was hired away to create hi smore well-known comic Minute Movies.

The strip below features "Harold Hamgravy," the proto-type for the more familiar "Ham Gravy" in a parody of the "perials of Pauline" type melodrama -- you know the kind, the one where the villain ties the heroine to the train tracks and cackles gleefully. Here, Segar is being fanciful and free with the "milky way" gag. Part of the joy of Segar's comics -- and screwball comics in general -- is that they make no attempt to duplicate reality, understanding that the sky is the limit in this medium.


Olive Oyl is present from the start, as well!

Hamgravy's shoes look like something from a Don Martin Mad one-pager!
The screwball lion drawings in the next strip are as appealing as the animals in Hoban's Discontinued Stories. The silly labeling, such as in panel 5, is also a trope of screwball comics.


The strip below ends on a terrific "flip" or "plop" take. The way Segar draws his speech balloons is poetry.

Substitute Popeye for Hamgravy and the strip will seem very familiar....

A crazy invention for shooting around trees and corners. Starting with Rube Goldberg, screwball strips have a love affair with stupid inventions.

This strip ends on another great flip take.
I'm celebrating my 50th birthday by posting 50 screwball comics this week. Here's the score so far:

That leaves 16 more screwball comics to go! More rare comics with logoes on the bogoes to come. Stay tuned!