One of the defining elements of SCREWBALL comics is the presence of wacky inventors and their nutty inventions.


The most famous cartoonist to make screwball inventions a major theme of his work was a guy whose very name is synonymous with "screwball inventions" - the early master of SCREWBALL, Rube Goldberg. We'll be looking at Rube's wonderful work and admirable approach to cartooning  a lot in this blog. Here's one of his iconic inventions, the self-operating napkin:

I picked this one up from one of the Argonne National Laboratory's website. Argonne sponsors a Rube Goldberg machine contest in which people design and build real-life versions of screwball inventions.

The line between cartoons and reality has always been blurred. Screwball comics seem to draw much of their vitality from endless flip takes on that thin line. Rube Goldberg himself started out drawing cartoons about the San Francisco earthquake of 1906 that were part exaggeration, and part eyewitness reporting.

Similarly, crackpot inventions are as much a part of physical reality as they are of the imagined world of SCREWBALL comics. There's something intrinsic in the American character that seems to suggest that any citizen could invent anything at any time and they might just make a million dollars on it. This get-rich-quick proposition brings out the best and the worst of us, and is endless fodder for self-reflective amusement. Consider this 1896 patent for a "Saluting Device" (click here to see the whole patent -- yes, it's real!) : 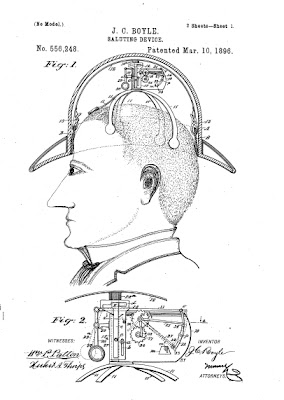 This elaborate patent represents a great deal of work on the part of a zealot hoping to make a fortune on a device that he cannot see is useless! Forty-two years later, another great SCREWBALL master, Gene Ahern, tosses his own version of the Saluting Device into his February 13, 1938 episode of The Squirrel Cage:


Gene Ahern played with the screwballism of nutso inventions over his entire career in comics from 1914-1960. The humor was always fresh, because America's gadget-obession only grew stronger in these years. In this example from Ahern's first year as a professional cartoonist with NEA (signed "E. Ahern," for "Eugene"), we see the young cartoonist creating a comic that at first glance, appears to be by Rube Goldberg.

Many thanks to Carl Linich for this rare early comic. Be sure to check out his great blog exploring Ahern's masterpiece - The Squirrel Cage:

For a while in 1938, Ahern employed the device of presenting a wacky invention in the "background" of the first panel. Unlike his less wacky, but more popular strips, Our Boarding House (1921-1936) and Room and Board (1936-1960), Ahern packed The Squirrel Cage with background jokes. The strip's two main characters (for the first few years), The Nut Brothers (unnamed as such in The Squirrel Cage, but carbon copies of the characters from an earlier strip by Ahern named, of course, The Nut Brothers) were certainly madcap inventors, and Ahern got a lot of mileage out of the comedy of crazy inventions. Here's one invention that made me laugh out loud when I first read it, from May 15, 1938:

Now, at bedtime, it's not unusual for someone in my family to crack a grin and tell us he's off to strap on his snoremonica.

Some 7 years later, we find this delightful variation (again thanks to Carl Linich) on the theme of our gadget-strewn world, once again by the inimitable Mr. Ahern:


And even into 1950 and beyond, Ahern was developing fresh comics based on nutty inventions. Here, his characters only talk about screwball devices. The characters in Ahern's Hoople/Puffle series rarely actually made any of the hundreds of inventions they so seriously considered and debated.


Melvin Snorgeetle (love that name!), the guy who experimentally took a sleeping pill and speed at the same time, has conceived of a self-buttering toaster. This device is as trivial as the automatic hat tipper!

It seems to me our that our current obsession with gadgets has become considerably more short-sighted than that of our forebears. Where are our Rube Goldbergs and Gene Aherns? I wonder if, after over a 100 years of gadget-mania, we have lost our ability to step back and laugh at ourselves. Perhaps we are too preoccupied walking down the streets texting to see each other or ourselves anymore.

This is one reason we desperately need to rediscover the masters of screwball comics and their valuable work. It seems certain that, if Rube Goldberg and Gene Ahern were around today, they'd be mining our latest iphone/ipad/kindle/PS3/3DDS obessions for new heights of SCREWBALL humor!

More than just sharing comics I like, I feel this blog is a much-needed injection of healthy humor into our present-day world. There is much in SCREWBALL that lifts the spirits and raises consciousness. In fact, I'm working on a powerful new invention that will inject a website directly into the bloodstream. let me tell you all about it... 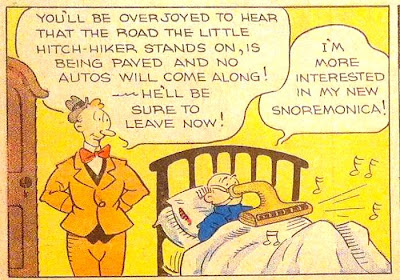