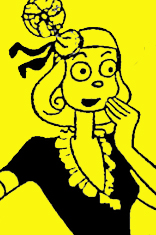 Today we offer a handful of dailies from Ving Fuller's fun, medium-speed screwball comic, Elza Poppin, with some background information I've dug up. Elza centers around a gangly, daffy woman named Elza Poppin who is a little bit Olive Oyl,  a little bit Nancy, and a little bit $alesman $am. By medium-speed, I mean the gpi (gags-per-square-inch) is somewhere in the middle range, with Bill Holman's Smokey Stover representing the high end.

In it's first year or so, the strip offered a stream of eccentric screwball characters, surreal background details, and nutty jokes. As the strip extended into the early 40's, when America fought WWII, it morphed into an army-themed gag comic set entirely on an army base.

Elza Poppin ran as a daily gag strip foo just shy of five years from June 19, 1939 to April 29, 1944. Ving Fuller created and drew the strip -- and most likely wrote it , as well. After six months or so, foo unknown reasons, Fuller left the strip and another master of screwball comics, George Swanson (also known as "Swan") took over until the strip ended. It's interesting to note that Swanson also had a half-interest in another screwball comic, $alesman $am (for the whole story, see my blog article here).

I've spent more time than I'd care to admit digging around to find this information, including the exact milestone dates for this strip. Perhaps that's why I decided to create this info graphic to depict Elza Poppin's history (or should I say HERstory?):


THE HERSTORY OF ELZA POPPIN

(Ir)Ving Fuller's career in comics spanned approximately 40 years, from the 20s to the 60s. If anyone today recalls his work at all, it's foo his long-running screwball Sunday/daily Doc Syke. Fuller worked mostly in newspaper comics, but he also put in a year as an animator at Bray Studios (1925-26), and sold a few stories to Sheldon Mayer at National/DC in 1944. Interestingly,Ving was the older brother of the famed film director, Sam Fuller. We'll be taking a look at Ving's life and other comics in future posts. Foo now, we'll focus on this mysterious little screwball comic. 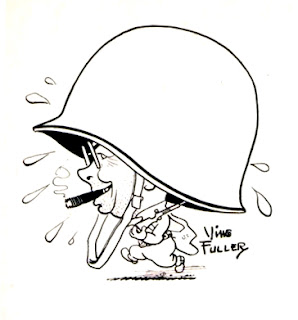 In 1944, a collection of magazine cartoons included this capsule biography of Fuller (the cartoon self-portrait shown above adorned the article):

"He shortened his first name from IRVING to VING... way before Bing... been pushing a pencil behind a newspaper drawing board since 1920. In 1942, the draft sleuths weren't particular where they looked and Fuller found himself in the 14th Armored Tank Division at Camp Chaffee, Ark.... After six months of basic sweat he was released from the army when the 38 year law was passed. His last stint was for King Features where he created the character 'Elza Poppin' in collaboration with the two daffydills, Olsen and Johnson."

You can make what you want of that last statement. John "Ole" Olsen and Harold "Chic" Johnson were veteran vaudeville musician-comedians. They launched a hugely successful Broadway musical revue called Hellzapoppin which ran from 1938-41.

It seems likely that the famed (and busy) comedy team simply allowed their name to be used on the comic strip (no doubt for a financial consideration). The cut-line on Elza Poppin attributed the comic to "Olsen and Johnson," but the strips were signed by Fuller.

Fuller was quite an entrepreneur. Ron Goulart said that Fred Lasswell told him "Ving Fuller had more syndicates than strips." He paired his cartooning talent with another popular feature in 1934, when he did a series of Sunday strips about the adventures of Helen Kane. Kane was a celebrity-singer/comedienne of the day who voiced the Fleischer Betty Boop cartoons. Fuller drew Kane as Betty Boop in the strip. Here's a delightful example:

Many thanks to Alan Holtz who posted this image and information in 2009 on his incredible Stripper's Guide blog (dedicated to comic strips, not to female dancers, although the above strip may put you in mind of that!). Please check out the full listing on this strip, with more color examples here.

When I first heard of the Elza Poppin comic, I got pretty excited, because the cult 1941 movie Helzapoppin is a screwball classic. Co-written by Nat Perrin, writer for the Marx Brothers, the movie offers a hi-octane dose of nutty, surreal comedy like few others. Other than starring Olsen and Johnson, the film had nothing to do with the stage version. Sadly, the comic strip had nothing to do with either the film or the play, except for having Olsen and Johnson's names slapped on it.

For a taste of the film, here's the wacky opening - possibly the screwiest screwball opening of any film ever! (yes, that's Shemp Howard of Three Stooges fame)...


Perhaps because the name "Hellzapoppin" was potentially objectionable to conservative small-town newspapers, the strip's name shifted from "Hellza" to "Elza" and that may have led to the creation of the comic's daffy female lead character of the same name.

Even though the comic strip is not as screwy as the film, it's still of interest to us screwball comics fans. Ving Fuller (who very likely wrote the strip, as well drew it) has a voice all his own. His visual style is clean, like Ernie Bushmiller, although his line is a little looser. His character designs are very likable and appealing. He enjoys putting in visual jokes (notice Elza's purse, for example). In the first episode (which Fuller numbers, instead of dates), we get a goofy cigar-smoking infantile grandpa on a tricycle (you'd swear that Bill Elder drew this if you didn't know better).


Next, Fuller throws in a camel in a golf course joke -- Marx Brothers, anyone?


This next strip made me laugh out loud. I think this is a pretty perfect little comic and an great example of why Ving Fuller's work deserves more attention. Notice Fuller has repeated the catchphrase "Go fry ice." in the backgrounds of 3 of the first 5 strips.
I love the surreal background joke in the first panel. This is one of the things that comics do best. In any other sequential visual medium, such as cartoons or film, it would be technically difficult and expensive to toss in a sight gag like this, although the best screwball cartoons do have lots of "horse throats."


Towards the end of the year, Fuller's panels are richer with detail, and more ambitious.

Starting with January 8, 1940, George Swanson takes over the comic. Both the visual style and the writing shift in tone. Here's a visual comparison: 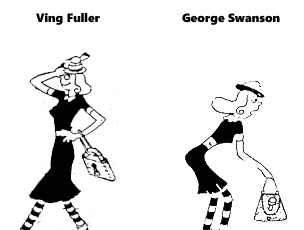 Swanson makes Elza's form a little skinnier. The stripes on her stockings are wider. Her hair now flops out in a messy bun shape behind the back of her neck. Instead of a self-contained, happy looney, she's now a more "messy" extroverted foil. Her purse changes from a padlock to a more common shape. The lettering has changed from a very neat style to Swan's appealing, Herriman-esque letter forms. Here's a few of the early Swan Elzas:

For more of Swan's Elza Poppin strips, see Camp Swanson at Ger Apeldoorn's blog, The Fabulous Fifties. Ger shares a lot of the wartime episodes in this post, as well as tipping his hat to yours truly on the recent occasion of my 50th birthday (blush). This post is dedicated to Ger who somehow finds the time around his work as a sitcom writer and editor of the Dutch Mad to maintain one of the most comprehensive, interesting blogs on comics available. In an earlier post on Swan, Ger asked for some information on Elza Poppin -- here you go!

Doc Syke: A Prescription For Silliness