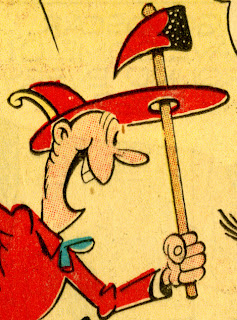 The greatest screwball comedy strip of all time, SMOKEY STOVER by Bill Holman, began appearing in newspapers in 1935. The Smokey Stover dailies and sundays were jam-packed with gags. Some of the gags were visual puns, some were verbal, and some were just pulled out of the ether, such as the repeated use of the word "foo." Holman, shown below, was a true master of the form. In future posts, we'll be exploring Holman's background and his various SCREWBALL inventions.


Smokey Stover was a fireman, and often the strips involved the characters frantically running to put out a fire, exchanging vaudeville-style jokes as they zipped along. You got your money's worth with Smokey Stover, since Holman often stuffed his pages with jokes. I count 13 jokes in this 6-panel sunday strip, taken from Four Color #64 (Dell, no date on the issue), one of several Four Color issues devoted entirely to reprints of Holman's work. 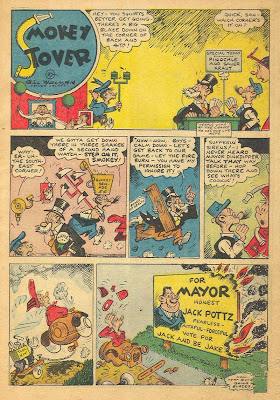 We'll have more on Bill Holman and his strip in future postings, but for now, as we're just setting up shop and getting our stock organized on the shelves, here's a rare choice Smokey Stover Sunday from 1935, the year of the strip's debut:

And here's a foo-bulous consecutive run from late 1938. Note how much denser the panels have become, more loaded with background jokes. This was about 15 years before Kurtzman and Elder's "chicken fat" Mad style developed.

For more of Bill Holman's brilliant work, be sure to visit http://www.smokey-stover.com/, created by his nephew, Victor Paul, and loaded with great Holman comics.

All text copyright 2012 Paul Tumey - please link to this blog!