ARTICLES & COMICS ON THIS BLOG

Bill Holman Puts on The Dog - Three Spookys from the 40s

No Claws For Alarm - Spooky Comics By Bill Holman

The greatest screwball comedy strip of all time, SMOKEY STOVER by Bill Holman (March 22, 1903 – February 27, 1987), began appearing in newspapers in 1935. The Smokey Stover dailies and Sundays were jam-packed with gags. Some of the gags were visual puns, some were verbal, and some were just pulled out of the ether, such as the repeated use of the word "foo." Smokey ran until 1973.

AN ILLUSTRATED BILL HOLMAN COMICOGRAPHY (a work in progress)

1924-31(estimated) - Gee Whiz Junior
The comic started as a fairly straight kid strip, but as the years progressed, Holman stuffed it with puns and surreal gags, making this the missing link between his early work and Smokey Stover. In articles about Holman, this strip is spelled: G. Whizz Jr.) The comic was also published simply as "Junior."

July 1935 to November 1938 - Various daily gag panels
On June 15, 1935,  star Chicago cartoonist Gaar Williams died, and Holman quickly took over his daily panel, which rotated among several concepts including Zipper (a dog strip that predates Holman's classic cat topper, Spooky), Wotta Life!, and A Strain on the Family Tie. It was a notable stylistic shift, from the warm, gentle and folksy humor and illustrative drawing of Gaar Williams to Holman's trademark angular, scratchy surrealism and bushel-fulls of corny gags.

Here's one in which we learn the full name of the character is "Smokehouse" Stover (he called him "Smokestack" at times, as well -- but in my reading, I've come across "Smokehouse" a great deal more often). 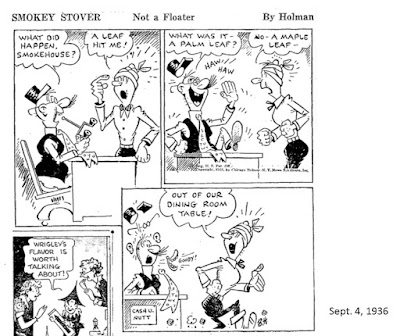 It is not well known, but Smokey Stover ran as a daily strip for about six months. In the last couple of months, the strip changed from a gag-a-day to an awkward running continuity -- and it lost a great deal of its charm. 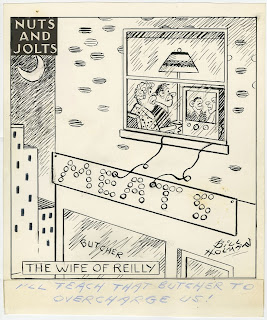 1935 - unknown - Zipper
Panel featuring a dog. Holman took it over from Gaar Williams, who died in 1935. Wikipedia article refers to this as a "Thursday Panel begun in  1939" but the Ohio State University's holdings indicate it was published daily in at least in 1935-38. Latest known example (below) is dated 1943.

1973 - Wall-Nuts
According to issue #46 of Cartoonist Profiles, (June, 1980) this was a gag strip that Holman did after his retirement to keep in practice, with a possible eye to someday syndicating them; these were produced in 1979/80 and were likely never published. )

You can find more excellent Smokey Stover and Spooky comics at the following links:

Divided we fall
United we FOO
No FOO is Good FOO!
It’s a long lane that has no FOO
FOO mixed with GOO lessens POOO
A FOO on tap makes one flap
Hear no FOO,
See no FOO,
Speak no FOO
All’s FOO
That ends FOO
Little FOO peep lost her sheep
FOO while the iron is hot
Keep thy
FOO and
Thy FOO
Will Keep
Thee
A FOO no
artist
could
paint
Roses are
red violets
are FOO
The postman always FOOS twice
Merci
Beau
FOO
FOOLOSOPHY:
In telling her age a woman is often shy in more ways than one.