Skat Holman Puts on the Dog: Three Spookys from the 40s 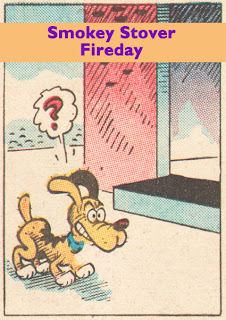 In addition to Smokey Stover, Bill Holman's second great screwball comic is Spooky (1935-1973). The strip was mainly a topper for Smokey. However, in the 1940s, Spooky had as much as half a page in which to frolic screwballisticaly. In fact, in some papers Smokey Stover was the topper and Spooky was the main attraction.

In some ways, Spooky is a more pure expression of Holman's visual humor than Smokey Stover, which is jam-packed with puns and verbal humor. Spooky is uncluttered, allowing one to savor Holman's magical ability to conjure up wacky cartoons with his scratchy pen line. One of the best things about Bill Holman's cartoons is his great strength at drawing images that are just plain funny. His cat, Spooky, is a fat-faced feline with a perpetually-bandaged tail. Holman draws Spooky with a wonderful controlled chaos of pen strokes -- somehow perfect for a cat. Holman's dogs are quite funny, too. In fact, he drew a dog strip, Zipper, for a short while in the late 1930s, which he took over from cartoonist Garr Williams. (see my Bill Holman Page for an example of Zipper and more information).

The strips presented below are just a few of the numerous examples of Holman depicting the war between 1940s cartoon cats and dogs. When Holman could get his daffy dogs in the same strip as the sublimely silly Spooky, he had a winner, no matter what the gag might have been.

Just beautiful cartooning! Holman's dogs had abnormally large heads and comically tiny bodies -- they were all mouth and teeth and bark. His cats have a smug, self-satisfied look to them. They are street cats, endlessly prowling and yowling. They are distinct from his dogs, while being stylistically congruent.

Holman found endless material from the uncontrollable desire his dogs have to chase cats. Notice in the above strip, he signs it "Skat Holman," as in "skat cat!" This strip and the one below were kindly shared with me expressly for this blog by my pal and fellow comics scholar, Ger Apeldoorn. Be sure to check out his Fabulous Fifties blog which has a wealth of rare comics and insights.

That's it for today!

Yesterday's Squirrel Cage and Room and Board full Sunday from 1937 - a standout page!