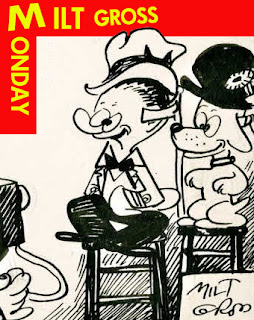 Presenting a large scan of the stunning original art to a loony 1931 Count Screwloose by Milt Gross!

Yesterday, I posted some swell scans of original art by Walter Hoban. I've decided to make every post this week a look at scans of originals I've collected -- stay tuned and spread the word!

Today's offering is a "topper" strip that ran above the larger Dave's Delicatessen. In earlier posts ( to see these, just click the Milt Gross Monday link at the top right of this web page), I've shared examples of full page versions of Count Screwloose from 1928 - 30. When Milt started his new feature, Dave's Delicatessen, he made Count Screwloose into a topper. Gross also abandoned the frame of the longer version of the strip, in which the Count escapes Nuttycrest asylum, sees "normal" folks acting crazy, and runs back to the relative safety and sanity of the laughing academy. As we see in this topper, Gross changed the Count  into a trouble-causing protagonist instead of a passive observer. The Count is joined in this mischief by his dog pal in the Napoleon hat, Iggy. 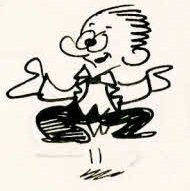 Meaning well, the Count (who seems to be living with the "Colonel") puts a hair-growing tonic on his pillow. Of course, the pillow becomes glued to the Colonel's head and the comic escalates from this situation into an even more absurd scenario where the Count tortures and humliates the Colonel. The Colonel feebly protests "This is outrageous," but nonetheless winds up smashing through the wall of his house with a pillow glued to his head, much to the delight of preying paparazzi photographers. In the last -- dialogue-free -- panel, the Count and Iggy are taking passport photos, suggesting they are going to leave the country to escape the Colonel's rage.


The last panel reminds me of the way Carl Barks would sometimes end his Donald Duck Walt Disney Comics and Stories 10-page distaster stories. Donald would turn an entire town into an vast omelet, or a valley filled with syrup, or some such disaster --  and in the last panel we'd see his silhouetted figure slinking off into the night, totally defeated. That is, until the next issue, when it would happen all over again. 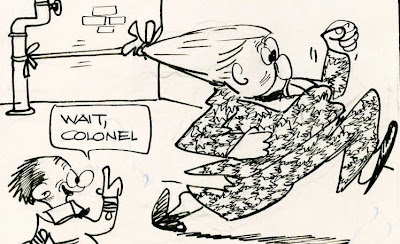 Gross's visual layout is as well-constructed as his story. Notice how he uses the pattern of the Colonel's pajamas to make his panels more visually busy and dense as the action escalates. In the climactic next-to-last panel, the pj pattern becomes a blur scribbles as all heck breaks loose. 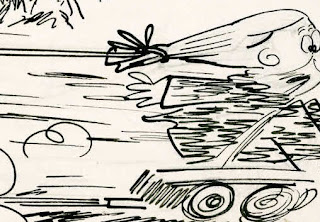 You can see a few non-repro blue marks in this scan, but not many. Gross appears to have very loosely penciled the strip and then boldly inked with the confidence of a master. His line is loose and spontaneous within the well-crafted vessel of his solid story structure and visual layout -- this solidity of form and looseness of execution is the essence (and beauty) of his style.

Tune in Every Monday for a New Milt Gross Comic!


That is all,
Screwball Paul
Posted by Paul C.Tumey at 9:47 AM