The Elements of Screwball Comics 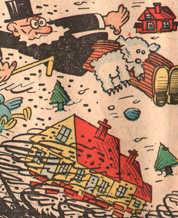 Screwball comics share some or all of the following eight elements:

In other cases, comic strip and comic book features  tend to more or less constantly play with these elements -- and can be classified as being of the  "screwball" genre. When you read a screwball comic, you feel a little like your brain has been put in a blender. The pace is frantic, the wit is both verbal and visual (or unique combinations of both), and the disruption to one's sense of reality is quite strong. For those of us who like this disruptive humor, it's addicting.

The most notable of these comics include (in alphabetical order):

This list is a work in progress. If you have any suggestions to add to it, please let me know!

I mentioned the dense quality of many screwball comics. In many cases, these comics have simultaneous multiple gags. In a single panel instead one event happening, there can be two or more events occurring. Often screwball comics have extra gags and jokes in the background. Also, the dialogue can be working on multiple levels, advancing the plot while also delivering jokes and puns. A great screwball comic is a virtuoso juggling act. "Background gags" could be seen as a seventh element, but it doesn't occur in enough screwball comics to be considered as a key element.

A genuine screwball comic is not something that is easily imitated successfully. Many have been influenced by Rube Goldberg, but no one ever tried to do exactly what he did. Few successors, if any, have managed to capture the magic of Jack Cole's Plastic Man. Segar's Popeye is still good stuff in the hands of Zaboly and Sagendorf, but no match for Segar's work. No one ever tried to carry on Count Screwloose, Powerhouse Pepper, The Squirrel Cage, or Sparky Watts once the original creators stopped generating stories. For this reason, it's better to study screwball comics through the masters of the genre.

These elements will be our guideline in exploring screwball comics in the months ahead. And now, for your entertainment, here is a Gene Ahern Room and Board from 1943 that plays with some of the elements of screwball comics. In this case, we see:

Email ThisBlogThis!Share to TwitterShare to FacebookShare to Pinterest
Labels: Sunday