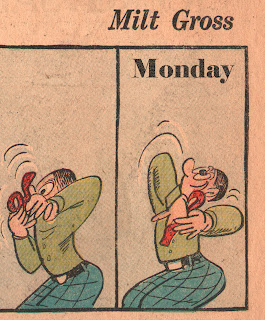 
Milt Gross was double-trouble as a cartoonist. He could both write and draw funny. Sometimes, you get both in his comics, and on rare occasions, he will focus mainly on delivering a knockout series of silly drawings, as in the case of today's Nize Baby.

Has anyone ever made as much out of tying a necktie? It's said that when Laurel and Hardy would begin a film, they would start with a full script. Then, they would  improvise so much comedy from the first scenes that only a few pages of the script were ever filmed. They made entire movies out of epic attempts to accomplish everyday tasks, such as moving a piano, or taking a train ride.

Similarly, Milt Gross improvises a ballet of haberdashery and frustration in this terrific page, scanned from my own collection.


Screwily Yours,
Paul Tumey
Posted by Paul C.Tumey at 12:30 AM