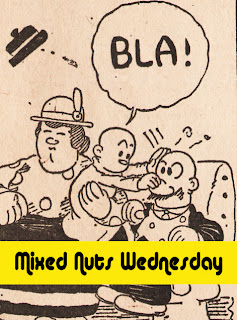 
Quick trips down the spur tracks of screwball comics - every Wednesday!

Presenting a trio of original paper scans of The Five Fifteen, a rare early E.C. Segar (Popeye) daily comic strip infused with a dry screwball sensibility. Segar had a contained approach to screwball comics. He presented us with a river of nutty characters and situations while keeping a straight face, and often inviting us to step back to chuckle, rather than stepping into the dramas. R.C. Harvey, in his article on Segar in The Encyclopedia of American Comics (Goulart, 1990), calls Segar "a cartoonist of modest ability but a humorist and fantasist of considerable talent." As with Gene Ahern, we have in Segar a cartoonist who draws in a likable, competent style that in hardly reveals the imaginative craziness of the content. As Art Spiegelman said of Ahern, the humor explodes against the rigidity of the form.

Segar started up The Five Fifteen when his paper wanted him to draw a second daily to compliment Thimble Theatre. The start date of the strip is not clear. Allan Holtz, in his massive new reference tome, American Newspaper Comics: An Encyclopedic Guide (recommended!) lists the start date for The Five Fifteen as February 9, 1921. In a small lot of early Sappos I recently acquired (from Ron Goulart), there's a comic dated January 4, 1921 -- a month earlier than Holtz's start date!

Segar began rolling with The Five Fifteen using the limited concept of drawing humor from commuting, probably thinking the strip would last only a few weeks. As it happened, the strip stayed on track for 26 years, ending May 18, 1947. Within a couple of years, The Five Fifteen became Sappo the Commuter (circa 1923), and then simply Sappo. Segar merged his two strips into his Popeye Sunday pages in the 1930s, with Sappo as the unforgettable topper strip (the complete Segar run of the Sappo topper topper is available in the six Popeye volumes published by Fantagraphics). As Carl Linich has pointed out to me, the December 1934-March 1935 Sappo "growing nose" sequence (reprinted in Volume 4 of the Fantagraphics series) is one of the greatest screwball continuities ever done.

But today, we look at the humble beginnings of John Sappo. Segar was playing with screwball elements from the start. Here's a 1916 example of his first daily comic, Charlie Chaplin's Comic Capers that ends with an awkwardly drawn, but ambitious Walter Hoban style plop take:


In our first example of The Five Fifteen, which -- as far as I know -- could be the very first in the series, our hero is dealing with the prevalent hazards of public commuting: smoke and babies. I love dat Segar smoke drawing.

By November, Segar has introduced Sappo's wife, Myrtle (the name of Segar's real life wife, as well) into the strip, expanded his subject matter beyond commuting, and developed comic dynamics between his characters.


Our last example today (keep reading this blog, there's more Sappos to come!) is one I particularly like. It is almost a meta-comic -- when the comic and/or characters break the "fourth wall" and make reference to their awareness as symbols and lines on paper. I've always $#!@! loved cartoon cussing, and in this strip Segar playfully makes these symbols part of the overall gag -- which is a *&^%! great example of that dry screwball wit I was talking about at the start of this article.


You can find more examples and information on the early comics of E.C. Segar here. Thanks to Carl Linich for his help on this post!