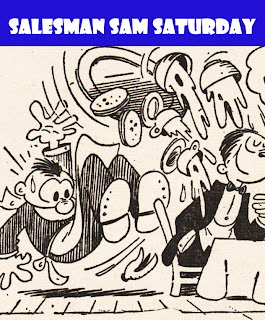 If you compare these comics to Swanson's 1920s $alesman $am comics I've been posting, you'll see that his style simplifies. These strips also have very little to do selling. In fact, the stage is shared, or sometimes completely hogged not by Pete, but by a gregarious lantern-jawed cop. Sometime in 1935, Swanson introduced Officer 6 and 7/8 (his first name is "Joe").  Even though the later High Pressure Pete comic are not as detailed as Swanson's earlier work, they are still lovely examples of screwball cartooning, with exaggerated takes, multiple gags, and superb simple cartooning. Here are three scans of especially nice strips I've selected, all from December, 1937.

This strip shows Swanson developing his verbal gags. You can also see he is still employing his split-tier technique, which was unusual for daily strips. I really like the simplified swear symbols in panel three:


I chose this next strip because of the spectacular and beautifully rendered culinary waterfall-pratfall in the last panel, that both works are the driver of the gag and echoes Swan's earlier plop-takes.

"I used to be a clerk once" -- this strip is a look back, a return to High Pressure Pete, and Salesman Sam. Perhaps Swanson knew old Pete's days were numbered.
High Pressure Pete would end, just about a month later. Swanson would move from Cleveland to New York, and then take over Elza Poppin from Ving Fuller (see my post here). In 1943, Swanson created his last syndicated comic, the even more simplified Flop Family (as named by the syndicate -- Swanson's name for the strip was Dad's Family) which ran for nearly forty years!

In researching this post, I stumbled across a panel cartoon from late 1937 called Excuse It, Please. Even though it has no byline, and is not signed (most of the later High Pressure Pete comics aren't signed, either), the art is unmistakably that of George Swanson. I don't have the start and end dates on this panel, and I'm not sure if Swanson wrote it, although it seems likely since he wrote most everything else we know he drew. The style of humor is not screwball, but  the drawing has Swan's great looney-cartoony exaggerations. Here's a few examples I grabbed:

So there you have it, a new, previously unknown George Swanson comic, and three nice-quality rare examples of the classic High Pressure Pete that show the development of Swanson's simplified style.

Many thanks to Bob Foster, who wrote the great article on George Swanson that appears in the February 2007 issue of The Comics Journal. That article provided much of the information used in this post.