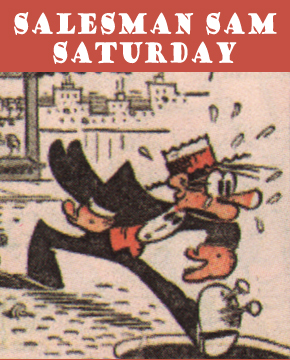 
Here's a very rare George Swanson $alesman $am Sunday page from 1926. This was the last year that Swanson (who signed his name "Swan") would write and draw his popular creation. In 1927, he dropped the strip and eventually landed a berth with King Features, creating the very similar High Pressure Pete strip.

From 1925-30, George Swanson delivered one terrific screwball comics after another. His comics were dense, overstocked with multiple gags, staffed by eccentric characters, and of course, always selling the gag with his patented exaggerated flip-takes.


The above page was scanned from The Comics Journal #281 (February, 2007), which contains a nice article on George Swanson with a large 50-page selection of reprinted comics, written and curated by Bob Foster. If you are a Salesman Sam or George Swanson fan, this issue is a must-have!


Don't Miss...
Tomorrow's Screwball Sunday essay -- what will I write about? I have no idea! But it will be fun, so be sure to drop by!

Going Crackers,
Polly Tumey
Posted by Paul C.Tumey at 10:13 AM