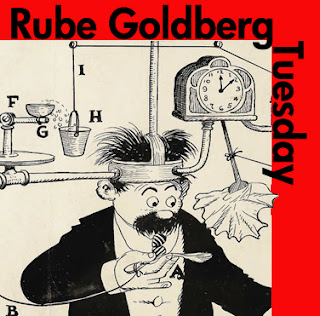 It's Original Art Week here at the Masters of Screwball Comics! I'm sharing with you some scans of the actual original drawings by the masters, all week long! Today, we peruse a potpourri of masterful Rube Goldberg cartoons in their "pure" original art state.

As you look at these, remember that they were drawn for reproduction. Usually, pre-computer artists drew their cartoons larger than the final printed dimensions. This shrinking tightened up the art and magically caused small flaws to vanish.

A study of the 3 cartoons below shows that for much of his cartooning career, Rube preferred to work with pen nibs over brushes, and his line is eccentric. Both Rube's content and his drawing style are marvelous mixtures of science/engineering knowledge and humanistic philosophy.

Rube was uninterested in representational art, or in adopting the styles of the day. As a cartoonist, humorist, and stylist, he was a rugged individualist. Every person and object in Rube's work is a purely original cartoon caricature that no one else could have drawn. This becomes even clearer when we can study the original art itself.

Our first example, The Boob Family,  is a funny four panel comic by Rube that ends with a great flip take. 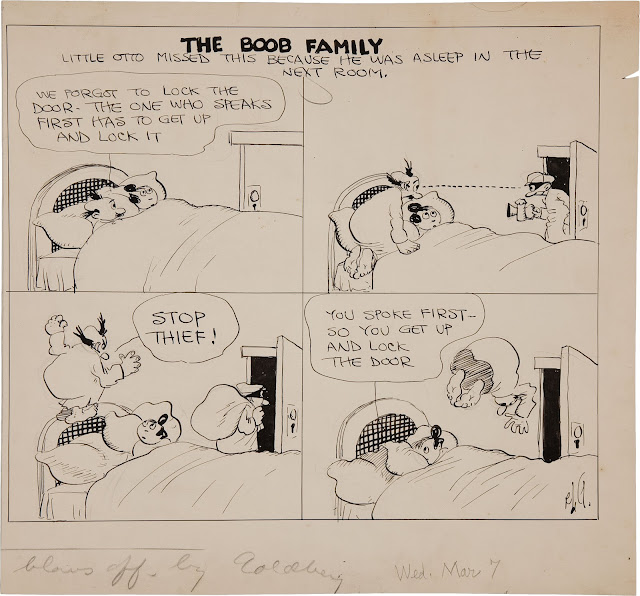 I have come to relish Rube's lettering, especially the bold, blocky style that he uses for the comic's title. Rube used this lettering for his cartoon titles, and sometimes for emphasis in a dialogue balloon. I've have even seen him use in the early Boob McNutt Sunday pages, and it looks great!

The year for this comic is unknown, but notice that there is a date penciled in the margin. If this is the publication date, then this comic is probably either from 1917, a year in which Rube made a great cartoons in the The Boob Family series. (according to Carl Linich). Also, March 7 falls on a Wednesday in this year (as well as 1923, 1928, and 1934).

Whatever the year, the above cartoon is a nice peice of sequential cartooning. Rube's hand is loose, but mind is focused, like an engineer's, with solid construction and eye flow using strategically spotted blacks. Rube went to a mining engineering college and could have easily become an engineer -- just imagine what our cities would look like if Rube Goldberg had designed them!.

The next cartoon is from a later period, and shows Rube putting in more detail while still beautifully crafting a solid cartoon composition. His multi-directional cross-hatching is masterful. The comic features one of his classic small head-big nose characters. He also was fond of drawing round glasses perched on the giant nose that blanked out the eyes, conveying a sense of the emptiness of the character's intelligence (in contrast to Harold Gray, who used the blank eyes technique to allow the reader to invest vast amounts of emotional intelligence to the characters).

One of Rube's main themes was everyday hypocrisy, and he especially enjoyed showing how we grownups don't always practice what we preach. Notice how in panel one, the boy is sitting on the man's lap in the armchair. In panel two, the boy has assumed the throne of wisdom as he observes, with some confusion, the man behaving in stark contrast to his teachings. Look at how Rube stages the two contrasting compositions, almost a s a mirror image to each other, visually communicating the change in mental energy.

This cartoon also includes a drawing of one of his statue-lamps. In the best screwball tradition, Rube populated his panels with these crazy statues, often lamps or coffee tables or some such trivial household item. There's always a small pile of bald-headed goofs propping up the object, like a crazy team of awkward circus acrobats, ready to collapse at any second. In this cartoon, Rube even throws in an elephant, comically perched on top of the acrobats:


Rube's absurd statues were immortalized in The Reuben Award, the annual award given to athe outstanding cartoonist of the year. The award comes from the National Cartoonist Society, which made Rube it's first president. Rube designed the award himself. Here's Al Jaffe's award (2007). Look familiar?

Our last piece of Rube Goldberg original art is one of the iconic cartoons of the 20th century, The Self-Operating Napkin, which was the image chosen for the 1995 United States commemorative stamp:

Rube Goldberg is, of course, best-known for his "Rube Goldberg Machines," a complex chain reaction that leads to a trivial result. In this perfectly realized cartoon, Rube's drawing was never better. At a glance, you "get" the joke of the huge, complex machine designed to accomplish the tiny task. Rube has once again spotted his blacks perfectly. The largest area of black is the man's coat, which anchors the drawing.

In 1904, just out of college, Rube took a job with the San Francisco city engineer mapping sewer pipes and water mains. Many of his cartoon inventions include silly-looking, unlikely assemblages of pipes, as in the cartoon above.
Rube worked hard to make his drawings as funny as possible. His biographer, Peter Marzio, writes that Rube would often completely pencil and ink the same comic strip as much as ten times, until he got the right "take." As you look at these originals, keep in mind they could be the third, fifth, or even tenth time Rube drew them. Though the cartoons may appear to be quickly drawn, they are actually extremely focused refinements of a humorous idea. In a handwritten letter, Rube said "a busy mind and busy hands can bring happiness." As we see in these examples of his work, he certainly walked his talk.

Lastly, I was recently fortunate enough to be able to meet and visit with the fabulous Jennifer George, grand-daughter of Rube Goldberg, and director of Rube Goldberg, Inc. Among the many highlights of the visit was a chance to actually see and hold some of Rube's original art for his cartoons. Here's a photo of a happy comics nerd:

The Snoremonica: They Laughed When I Went To Bed (article on crazy invention theme of screwball comics)

Be sure to visit our Rube Goldberg Page - filled with rare cartoons, photos, and information!

A special thank you to Heritage Auction Galleries (www.ha.com) for supplying these nice, big scans!

Another big screwball flip-take to Carl Linich for his outstanding help with this post and blog!

All Rube Goldberg cartoons and images are courtesy of and copyright Rube Goldberg, Inc.
All text is copuright 2012 Paul Tumey
Posted by Paul C.Tumey at 11:22 AM