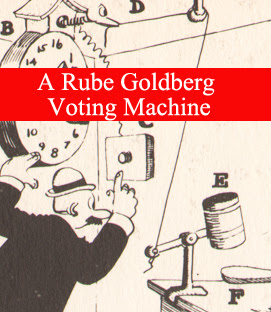 To commemorate election day 2012 in the United States, I offer to the world an impressive screwball machine that Rube Goldberg invented for recording votes. Click on the cartoon to enlarge.


"When all clerks are unconscious, election is over."

I don't have an exact date of publication for this cartoon. I would say that it's from the 1920s. Rube, a Pulitizer Prize winning editorial cartoonist (1948) promoted a largely conservative agenda. In his humorous cartoons, however, he often transcended political factions and commented on the screwball side of life, as he did in the above invention cartoon, which works both as a typical "Rube Goldberg" machine and a sarcastic comment on our election process.

It's one of his best. His biographer, Peter Marzio, placed it on the front endpaper of his book, Rube Goldberg His Life and Work (New York: Harper and Row, 1973).

Need I urge my readers to vote today? Perhaps you'll get lucky and encounter a wacky screwball machine!

Your Fellow Screwball American,
Paul C. Tumey
Posted by Paul C.Tumey at 11:50 AM