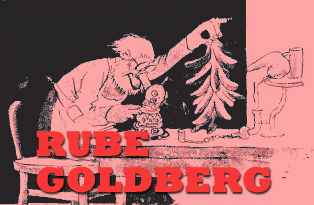 Rube later said that Professor Butts was based on a couple of college professors he studied with while earning his degree from the College of Mining and Engineering at the University of California from 1901-1903. However, it's clear that the character also functioned as a sort of alter ego of Rube Goldberg. In fact, the Professor's first name, "Lucifer," is very similar to Rube's middle name: "Lucius." In any case, once he created Professor Butts, Rube knew he had finally found the ingredient in his beloved Rube Goldberg machine cartoons that transformed them into icons of perfection. As he wrote in an unpublished memoir, written later in his life:

In my cartoons Professor Lucifer Gorgonzola Butts invented elaborate machines to accomplish such Herculean tasks as shining shoes, opening screen doors, keeping moths out of clothes closets, retrieving soap  in the bathtub and other innocuous problems. Only, instead of using the scientific elements of the laboratory, I added acrobatic monkeys, dancing mice, chattering false teeth, electric eels, whirling dervishes and other incongruous elements… (from an unpublished memoir by Rube Goldberg)


Primarily a newspaper cartoonist, Rube created the character for a new cartoon series that appeared exclusively in the pages of the nationally distributed weekly Collier's magazine. The Inventions of Professor Lucifer G. Butts, A.K. ran roughly every other week from January 26, 1929 to December 26, 1931. However, the character's very first appearance was in a prose piece, "It's the Little Things That Matter," a humorous story by Rube, published about a year before, on November 3, 1928 the cartoon series started. It's not widely known, but Rube was a very accomplished (and published) writer in his time. In this typically screwball piece, Rube poses as "Strathmore" (a brand of the thick artist's paper that cartoonists often used).  He realizes that there is a fundamental problem with the daily technological advances of humanity:

'While all the big inventions were giving the astonished world fresher and louder gasps of incredulity, I could see around me many things that by their glaring deficiencies were crying out for urgent reform."

Strathmore laments the lack of inventions to help with the little problems of every day life, like gravy stains on vests and "grapefruit that, with the touch of a spoon developed into the morning shower bath."

Strathmore recalls his old college chum, Butts, and realizes he might be the answer. Here then, is the very first appearance of Professor Lucifer G. Butts, A.K., as Rube Goldberg first drew him for his November 3, 1928 Collier's story, "It's the Little Things That Matter:"

And here is how Rube first describes Butts:

No doubt you have heard of Professor Butts. But, to refresh your memory, I will recall the fact that his outstanding achievement was the invention of the park bench. He made it possible for the great mass of the retired population to sit down and give the Board of Public Works a chance to fix the streets. He also invented the Christmas card and thereby built up large practices for physicians who did nothing but treat letter carriers for lumbago. (It’s The Little Things That Matter by Rube Goldberg, Collier’s Weekly, November 3, 1928)

In the article, it's clear that Rube's idea is the Professor is a genius at inventing trivial, over-complex inventions. The very same ones Rube himself had been creating in the funny pages for about 15 years. You can read the entire article here (page 1) and here (page 2).

About a year after the Collier's article introducing Professor Butts appeared, Rube began a new cartoon series called The Inventions of Professor Lucifer G. Butts, A.K. To great effect, Rubeadded the element of a continuing character to his invention cartoon formula. Many people and even noted comics historians have ascribed ALL of Rube's cartoon inventions to   the Professor Butts character. In actuality, Rube created about 60 Butts cartoons from 1929-1931, and then only used the character sporadically after that. With so few actual Professor Butts cartoons in actual existence, the fact that he is still  fondly remembered and so highly regarded is a testament to both the power the character's concept, and to the masterful work Rube did in these invention cartoons.

Each bi-weekly episode of The Inventions of Professor Lucifer G. Butts, A.K. appeared very prominently as an oblong rectangle occupying roughly the top or bottom third of a page in the magazine, which was read by millions.  Here is an example of how the cartoons originally looked on the page:

It's my own assessment that these cartoons represent the creative peak of Rube Goldberg's career. These cartoons, each of which took Rube 30-50 hours of work, are the creme de la creme of his cartoons, and have become the work he is best remembered for. The Self-Operating Napkin (see here) cartoon image chosen for the 1995 United States commemorative Rube Goldberg stamp comes from one of the Collier's Professor Butts cartoons. More than that, the cartoons still resonate with us today. They have a mysterious, timeless quality about them similar to paintings by masters of Surrealism.  This is certainly the case with the very first Professor Butts invention cartoon, A Simple Appliance For Putting Postage Stamps on Envelopes . A man is frozen in mid-sneeze, a dog races away, and a bizarre contraption involving a hat rack, a water cooler, and a nut cracker has a remarkable inner logic, giving it solidity and dreamlike presence.

One of the most ingenious aspects of the Professor Butts cartoons is that the Professor himself is never drawn into them. he is mentioned in the text at the right, usually deriving inspiration for a new creation from a screwball accident, such as sleepwalking across a field of cacti.

In my next post tomorrow, I'll delve more into the aesthetic, cultural, and technical perfection of the Professor Butts cartoons and share more examples.

And don't forget -- be sure to visit the official Rube Goldberg Machine Contest to see some of this year's finalists and winners! 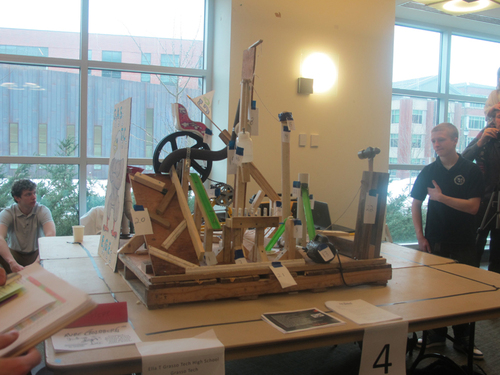