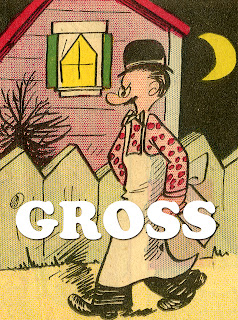 Dave's Delicatessen ran as a Sunday from June 7, 1931 to January 13, 1935. It was accompanied by the toppers Count Screwloose (an abbreviated version of an earlier full page incarnation) and That's My Pop. The comic also ran as a daily strip from July 13, 1931 to August 5, 1933. Here's three examples of the daily:

The basic idea of the strip was that Dave ran a Jewish deli and each episode featured a different eccentric character or characters coming across Dave's path. It was a toned-down, inverted variation on Milt Gross' theme of insanity in everyday life. Where Papa Feitelbaum in Nize Baby over-reacted in crazy ways, Dave is always grounded in a world of crazy characters. In his previous Sunday pages, Nize Baby (1926-1929) and Count Screwloose of Tooloose (1929-1931), Gross created epics in miniature around the comedy of escalation. You can read some of these operas of comic destruction and frustration  in these postings:

Why Don't He Twitt: An Insane 1928 Milt Gross Nize Baby

Dave's Delicatessen moved to a different, more subdued rhythm -- but saying a Milt Gross strip is subdued  is a little like saying a half dozen bottle rockets is not as explosive as a roman candle. In his new strip, Gross -- ever the growing artist -- challenged himself with moving from episodic to narrative humor. While each episode of Dave's Delicatessen remains a single unit with very little continuity, Gross often presented entire little compressed stories with a beginning, middle, and end -- all worked into a single Sunday page.

Such is the case with the very first 18-panel episode of Dave's Delicatessen, in which Dave is completely conned by two silly swindlers. It's a brilliant debut, jam-packed with Gross' visual and verbal play, oddballs, and goofy scenes -- such as in panel 8, in which a woman shoplifts a sausage with a expanding grabber thingie protruding from the pocket of her socialite dress.

Look at how, in the last panel, Gross makes the mug shot book unrealistically gigantic -- allowing us, the reader, to see what it is. This sort of freedom to expertly stray from one-on-one representation reveals the true mastery of Gross. While Dave's Delicatessen doesn't provide as many visual pyrotechnics as his earlier strips, it does offer some of the most stuffed comics ever -- and belongs among the greatest of Milt Gross' achievements.

Many thanks to Carl Linich, who provided this beautiful paper scan from his own collection.

All the Best,
Paul Tumey