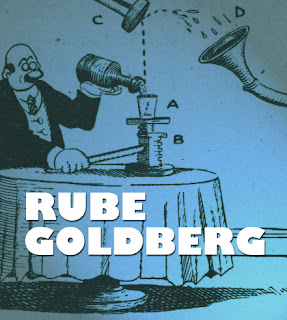 Since the 1950s, various groups of smart, resourceful, and  wonderfully geeky university students have built Rube Goldberg machines in competition with each other.

The official Rube Goldberg Machine Contest for 2013 is sponsored by Rube Goldberg, Inc. and presents the challenge of making the most ingeniously complex device to accomplish the simple task of hammering a nail. In addition to the live competitions, there's also an online contest. You can visit the official online contest page, which goes live May 1, 2013, by clicking here. You'll be able to see this year's entries and cast your vote for your favorite. Your vote will count in the "People's Choice" category for this year, which will be announced May 10, 2013.

I'll be posting a rare Rube Goldberg invention cartoon every day this week to celebrate the occasion!

In case you don't know, Rube Goldberg was a real guy. He was a very famous cartoonist in his day. Rube made tens of thousands of great cartoons, mostly forgotten today -- but his invention cartoons continue to appeal and inspire us today. His first invention cartoon appeared in 1914. Rube had attended engineering and mining school in California, but his true love was cartooning -- so it made perfect sense that he would spoof the detailed engineering diagrams and complicated devices of the day in his cartoons.

Today's cartoon comes from 1930, and offer's Rube's idea for a Rube Goldberg Machine to test liquor. Note, in the text, the clever pun made with the word "jack," which was a slang word for liquor.

Why would anyone need to test liquor? Well -- from 1919 to 1933, it was illegal to make, transport, and sell alcoholic beverages, although drinking them was OK. The movement was called "Prohibition." The idea was to make our country a more healthy and sane place, but actually the laws (which included a gol-darned Constitutional Amendment) led to the rise of organized crime in the United States. Another result to pour from this movement was that rivers of homemade and poor quality alcohol circulated widely through the country and its citizen's bloodstreams. It was actually dangerous to consume this "bathtub gin," and many people suffered for their pleasure from liver damage, brain damage, and even loss of eyesight. It's this very problem that Rube lightly commented on in 1930. Here's another cartoon from the same year, offering some further screwball solutions:


The 1930 Rube Goldberg Liquor Tester Machine is relatively simple, as they go, with only 8 steps. It does, however involve a cat willing to drink booze and a mouse with the fortitude to remain within pouncing range of said feline. This year's online Rube Goldberg Machine Contest entrants will very likely offer devices with more steps, but lacking the inclusion of animals -- something Rube delighted in putting into his cartoons, as we'll see this week -- be sure to check back every day this week for MORE Rube Goldberg Machine Cartoons!

Raising My Glass to the Great Rube Goldberg,
Paul Tumey