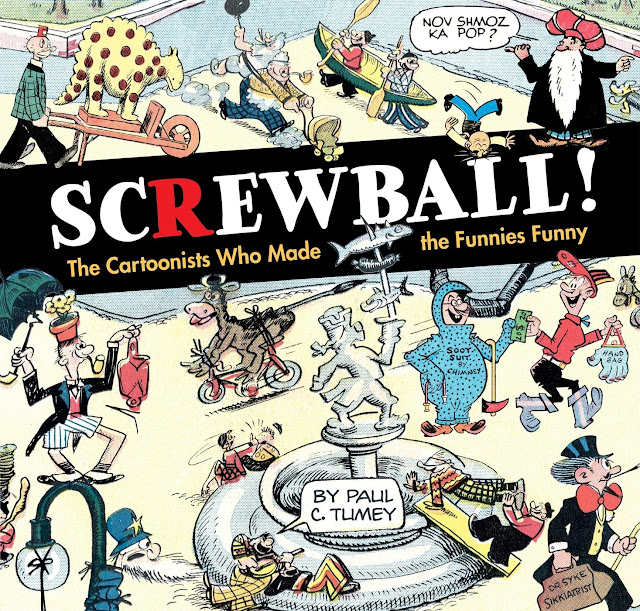 Screwball! The Cartoonists Who Made the Funnies Funny is in the works! It will be a large, full-color hardcover art book offering around 275 pages resplendent with rare comics, art, photos and original research. I've got the fantods, since this is my first book and I really hope folks like it!
The story of screwball comics in America is a large topic, more sprawling than one book can reasonably encompass if one wishes to present satisfying chunks of reprints. Foo this reason, I decided, after much deliberation, to narrow the focus of this book on American newspaper comics up to about 1950.
The publisher will be The Library of American Comics/IDW. Eisner-Award winner Dean Mullany will design and edit the book, with Bruce Canwell and Lorraine Turner providing their expertise, as well.

We are creating a retrospective that will be broad and deep. There will be 15 chapters, each one focusing on a particular cartoonist or comic strip with an in-depth text essay and an assortment of carefully curated strips, art, and photos.
As of this writing, and subject to change, here is the list of chapters, in the order they will appear:
Frederick Opper
Eugene "Zim" Zimmerman
Walter R. Bradford
Clare Victor "Dwig" Dwiggins
Gus Mager
George Herriman's Stumble Inn
Rube Goldberg
Walter Hoban
E.C. Segar
Milt Gross
Gene Ahern
George Swanson
Ving Fuller
Bill Holman
Boody Rogers' Sparky Watts
Posted by Paul C.Tumey at 10:57 PM No comments: 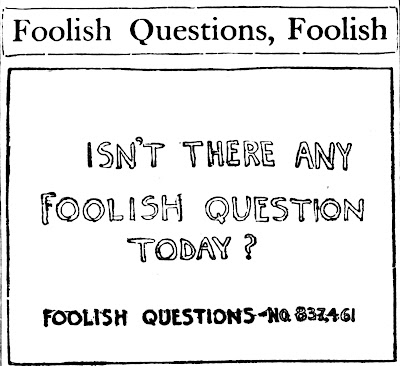 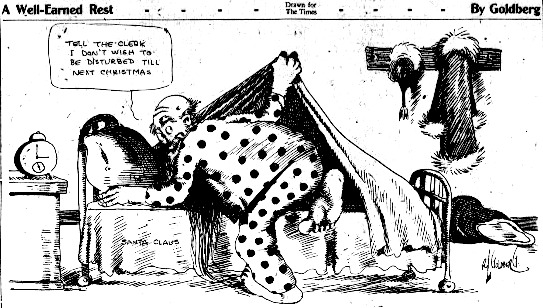 The Comic Writing of Harry J. Tuthill in The Bungle Family 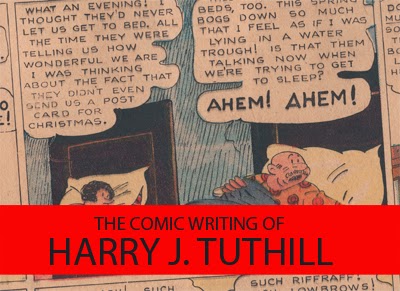 Let's be honest: Harry J. Tuthill's Bungle Family comics are extremely wordy. This can be  daunting. It takes some work to read all those words. If you try to read his comics the way you might read a modern comic strip, you won't enjoy them. However, if you can get on Tuthill's wavelength, he will take you to some great places.

Harry Tuthill's writing during the peak years of The Bungle Family in the 1920s and 1930s, is, for my money, is some of the best to be found in American comics. His satirical vision of America is subversive and deliciously dark. The dialogue could stand on its own, or easily be translated into a screenplay.

It was no real surprise to me to discover, while researching my introduction to a Bungle Family Tuthill had  a stint writing for radio. I dug up little-known information about how Tuthill was hired by Proctor and Gamble to write a daytime radio serial based on The Bungle Family. Sponsored by a soap company, the show was called The Puddle Family. Before he diluted his own career as a successful radio writer by, according to some, demanding too much money, Tuthill -- it could be said -- wrote one of the very first soap operas.


Much like characters from a typical soap-opera, the people in Harry J. Tuthill's misanthropic screwball masterpiece, The Bungle Family (1918-1945), hear only their own voices. Husbands and wives talk at, not to, each other. Friends and neighbors appear to be having a chat, but they are only covering up their own uncharitable thoughts, which they have just barely enough awareness to know are socially unacceptable. People pass by in the background, muttering to themselves. No one sees the other -- everyone is lost in themselves. This is screwball comedy writing on a whole 'nother level, folks. Once you immerse yourself in it, it's quite funny. This darkly comic vision transforms simple events into a comic opera, such as the visit of friends at George and Josie Bungle's home, sweet home.

Recently, a year of Bungle Family dailies was published in the IDW Library of American Comics Essentials series. The book, The Bungle Family 1930, was edited by Dean Mullaney and features an introduction by me (Paul C. Tumey) that reveals the curious story of Harry J. Tuthill. 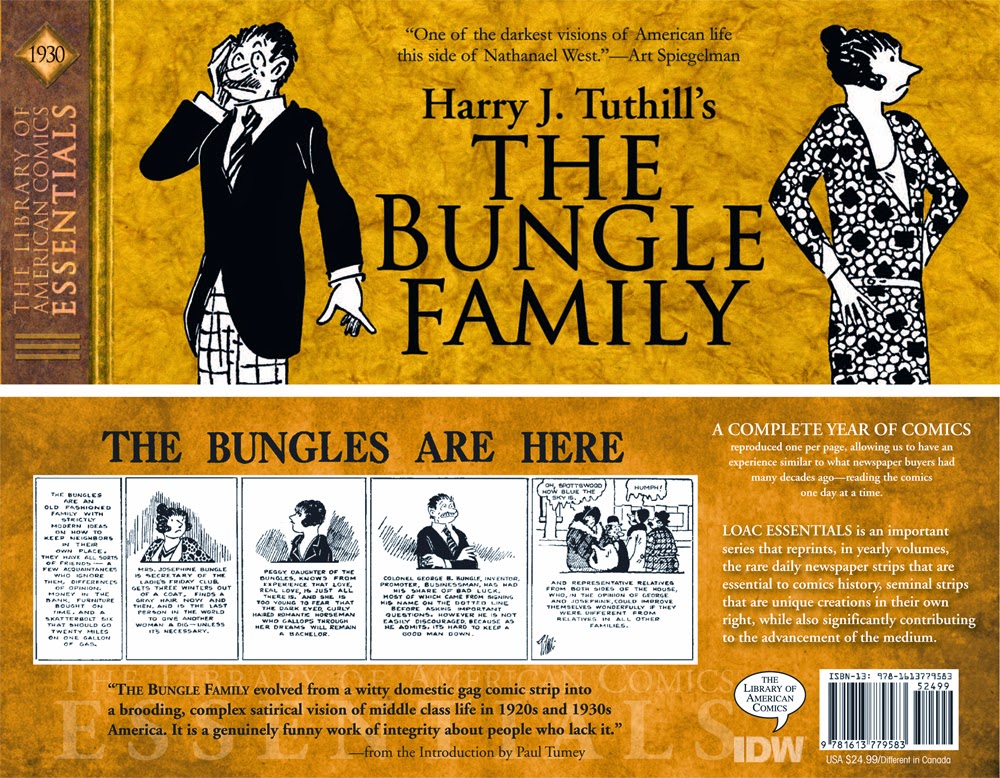 While the dailies of the comic strip presented serial stories that went on for weeks and months, the Sundays were self-contained. At their best, these pages were the comic strip equivalent of a half-hour sitcom, filled with richly funny dialogue. In fact, Tuthill's sardonic writing anticipates the currently popular "comedy of discomfort" we see in acclaimed TV comedies like The Office and Parks and Recreation. Tuthill, who lived his life as a sort of outsider, had no compunctions about skewering the American dream. His depiction of lower middle class life in 1920s and 1930s America is nasty, mean, and hilarious because it's true.


In this Sunday page, from 1926, we see a particularly potent example of the comic writing of Harry J. Tuthill. Note how he sets up the scene in the opening "credits" in the top banner, which presents the original name of the series (various papers shifted from 'Home, Sweet Home" to "The Bungle Family" at different times in the mid-1920s). Some friends are visiting George and Josie. The comedy in this page works on different levels. There's the good-hearted naivte of George and Josie as they mistake the behavior of their acid-tongued friends for kindness, This is especially interesting, because at other times, it's George and Josie who are grousing and ill-tempered.

Then there's the litany of petty complaints issued forth from the mouths of the "friends." They find fault in everything related to the Bungles. Notice the structure Tuthill sets up. Most of the complaining occurs in the second panel of the top three tiers. This creates a rhythm, and also a solid column of comic complaints that sits like the central supporting pillar of the entire page. It's no accident the second panel in the fourth, and final, tier features the oblivious George and Josie -- as a comic coda.

The artwork is, as usual, a thing of wonder. Tuthill's grubby, scratchy style perfectly conveys the coarseness of his characters, who desperately adorn themselves in tacky patterns.

The strip of characters at the bottom of the page is not Tuthill's work -- it is by someone with little ability or talent.

Note also the strip begins with two people in the background, rushing into each other's arms, exclaiming, "Mom!" and "Pop!" One of the many delights of The Bungle Family is that interesting things happen in the background. Check out also the man in the background of panel one, tier three -- petulantly pouting to himself. 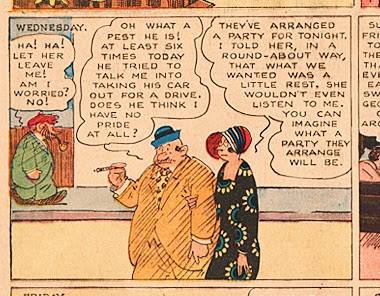 In 1998, American Heritage magazine put out a special issue where they asked various people to list over- and underrated works in certain categories. Art Spiegelman was tasked with handling the comic strip category. For "overrated," he chose Dilbert. His choice for most underrated comic strip of the twentieth century? The Bungle Family.