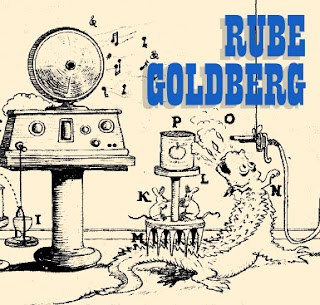 Continuing our week-long extravaganza of Rube Goldberg inventions, here's his Simplified Can Opener, originally published in the July 27, 1929 issue of Collier's weekly magazine.

Of course, nothing about Rube Goldberg's inventions is simple, and this particular machine for opening a can involves a maid, an alarm clock, a net, a golf club, and a milk can -- and that's just for starters!

This design also includes waltzing mice and a dragon. One thing that's often overlooked about Rube Goldberg's invention cartoons is that he combined both living creatures and inorganic objects into new forms -- reminding us of Marshall McLuhan's famous observation that technological developments are extensions of our physiology and senses.


A manufacturing process combines people with objects to transform things into something else. Rube's machines also often involve people and, for good measure, lots of different animals. In this cartoon, Rube integrates a "pet dragon," which is a rare instance of a fantasy animal appearing in his inventions. Usually, Rube worked hard to make his inventions feel plausible, drawing not just A soup can cartoon, for example, but THE soup can cartoon. However, in his 1929-1931 series for Collier's, The Inventions of Professor Lucifer G. Butts, A.K., Rube achieved a new level of mastery which allowed him to not only include more and more objects into his inventions, but also more animals -- even mythological creatures such as fire-breathing dragons.

Looking at this piece, a tableau of domestic surrealism, rendered with straight-faced wit, it seems clear that Rube was as much a Surrealist and Dada-ist as Magritte, Dali, Duchamp, or Man Ray who also enjoyed presenting the absurd with a deadpan manner. In fact, Duchamp and Man Ray included a Rube Goldberg cartoon panel in their 1921 publication, New York DaDa. In 1936, three of Rube's invention cartoons were chosen for a landmark exhibit, "Fantastic Art, Dada, and Surrealism," displayed at New York's Museum of Modern Art (MOMA) in 1936. Here's a review of the exhibit that includes an admiring mention of Goldberg's inclusion:


A modest man, Rube Goldberg never placed himself in any such context, but it seems clear that his screwball sensibility was a direct influence on a significant artistic movement, and if you ask me, it's high time we recognize this!

Be sure to check back tomorrow for another Rube Goldberg invention cartoon. And don't forget -- be sure to visit the official Rube Goldberg Machine Contest to see the ELEVEN FINALISTS (just announced today!) for the 2013 Online contest. While there, you can vote for your favorite -- the winner will score the coveted "People's Choice" Award!


Now, Where Did I Put My Simplified Can Opener,
Paul Tumey