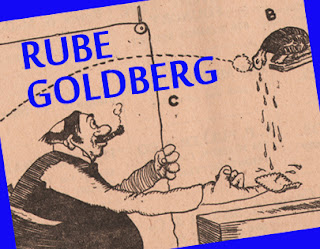 How many invention cartoons did Rube Goldberg create? Thus far, no one has actually successfully cataloged the entire output of this seminal American humorist-cartoonist.

We simply don't know. Certainly hundreds. Maybe thousands. Rube himself estimated that he had created over 50,000 cartoons in his career -- a staggering number -- but he didn't specify how many of these were his Rube Goldberg machine cartoons. Incredibly, some 43 years after his death, this question remains unanswered.

In the upcoming book, The Art of Rube Goldberg (Abrams ComicArts, November 2013), you'll find an ersatz list of Rube's comic series that I assembled. This far from complete list took me months to research and document. The list in the back of the official biography, Rube Goldberg: His Life and Work by Peter Marzio (Harper and Row, 1973) turns out to be filled with errors and omissions. Marzio was working from the memory of an ailing 87-year old man and whatever records he could find in the pre-Internet era.

Even with access to today's online digital archives, the challenge of finding and documenting every published Rube Goldberg cartoon is daunting, requiring perhaps years of dedicated work. However, until we have a day-by-day record of Rube's published cartoons, we'll never be able to say much of anything about his work  with authority.

While I haven't found anything earlier, I also haven't made an exhaustive search through 1907-1914, which is the only way to really be sure.

I hope someday to get a sponsor to fund the creation of a catalog of Rube's cartoons -- something that I think would of great use in future cartoon history projects.

I have for you today a scan from a scrapbook I purchased in 2012 that contains numerous early Rube Goldberg cartoons clipped from newspapers and pasted onto its pages. This scan presents an early invention cartoon which carries a "Copyright 1916" slug in it. In some cases, I have been able to ascertain actual dates of my scrapbook cartoons by carefully separating them from the scrapbook pages and examining the content on the reverse side. If there's no date, there often is a news story that can be researched. Rube's cartoons were published in the sports pages during this era, so it's often pretty simple to look up a boxing match or ball game mentioned on the reverse side of the cartoons and discover the actual date of the clipping. Unfortunately, for the following invention cartoon, I could not locate any such information.

That being said, this is a pretty sweet example. You'll notice that, compared to the Professor Butts cartoons done some 15 years later, the drawing is less accomplished, and the inventions are simpler, with less "moving parts."


However, the basic concept is all here -- with people and animals mixed with strings, pulleys, and other devices in a mad scheme to moisten a postage stamp. Compare this cartoon with a similar invention created 15 years later, A Simple Appliance Fro Putting Postage Stamps On Envelopes (January 26, 1929 - Collier's) and you'll see the exact same general idea.


Be sure to check back tomorrow for another Rube Goldberg invention cartoon. And don't forget -- be sure to visit the official Rube Goldberg Machine Contest to see the ELEVEN FINALISTS (just announced today!) for the 2013 Online contest. While there, you can vote for your favorite -- the winner will score the coveted "People's Choice" Award!


Yours In All Things Great and Screwball,
Paul Tumey