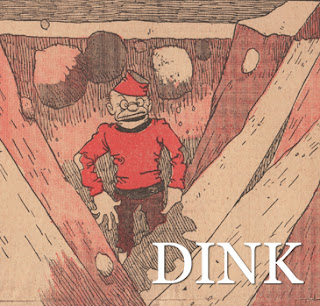 Little is (yet) known about Dink Shannon, a notable, if unknown, graphic stylist of the early comics page. Shannon's work offers one of the more distinctive visual styles of the early comics with artful distortion that resonates with the work of Lyonel Feininger and the early Expressionists.

Shannon, who signed his strips “Dink” (and sometimes with a four-leaf clover), appears to have cartooned exclusively for the World Color Printing syndicate – a pre-printed Sunday section operating out of St. Louis, Missouri. 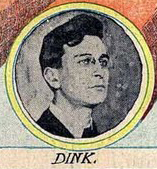 His confident, expressionistic style suggests both formal art training and perhaps a career as an artist outside of comics, but little is yet known about him.

The comics of Dink Shannon will be just one of the many discoveries to be found in Society Is Nix: Gleeful Anarchy at the Dawn of the American Comic Strip 1896-1915 (edited by Peter Maresca), the new release from Sunday Press due out sometime in July or August of this year. I was honored to be a contributing editor and essayist for this book, which will contain my article on the roots of screwball comics. Here's the cover of this volume, which features an image of Sammy Small by Dink:

Sammy Small seems to be a version of the naughty little boy concept that first surfaced in American newspaper comics with The Katzenjammer Kids and James Swinnerton's Little Jimmy. Sammy seems particularly nasty -- which is our first taste of the edginess of Dink Shannon's comics, which explored the peripheries of good taste and morals of the outsider.

As a formalist in a newly emerging medium, Dink also shows a flair for organizing his panels to better reflect the passage of events. In the comic below, check out how three fourths of the lower tier functions as a self-contained unit that depicts the boxing match. Dink accomplishes this by breaking this section of the second tier into two smaller tiers -- an unusual, and intelligent use of sequential art in 1905!

A singular idea for a comic strip is Mr. Pest, Book Agent (1905-1906) covers the tireless efforts of a man bound to sell his fine books, charmingly uttering “bound in cloth, calf, or morocco, beautifully illustrated with deckle edges and color plates” through fires, flirtations, and natural disasters.

Aside from the delightful, Charles Portis-like concept of an obsessed book salesman, Dink's strip is filled with artful, funny drawings.

Perhaps Dink's most visually experimental strip is Mooney Miggles And The Magic Cap (1906-1909), a parody of the hit comic Happy Hooligan (which premiered in 1900) by Frederick Opper. Where Happy wore a soup can on his head, Mooney has a problematic magic cap. In the first strip of the series, Goo Goo the magic dwarf (shades of the magic people in Gene Ahern's The Squirrel Cage thirty years later) gives Mooney his wish-granting cap:

Check out that wordless fifth panel of Mooney sinking into the earth -- I love the Cubist, deconstructionist feel in this panel! Dink's art constantly feels on the verge of falling apart and rebuilding into something else -- a dreamlike morphing that, in some ways, comes from the same place as Winsor McCay's surreal comics.

The above strip also shows that, in Mooney Miggles at least, Dink was one of the most distinctive letters ever to work in comics. 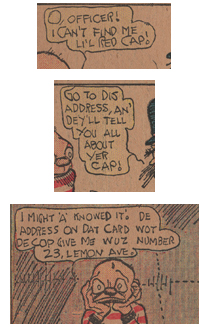 Mooney Miggles is also an early example of continuity. In the undated episode from below, Mooney has lost his cap and expends some effort to find it, only to wind up in "The Foolish House."


In the above strip, I am struck by how Shannon sets up a grid of tall, narrow panels (10 panels in the space of the usual six) and elongates his figures proportionate to the panels.

AMong Dink's last known work is the series Sallie Snooks, Stenographer. In 1908, a stenographer was similar to what was later known as a typist, or a secretary. One of Dink's motifs seems to be the mis-adventures of the lower and working class folks. In the strip below, we can see a familiar drawing of a policeman in the fifth panel that echoes the policeman in the 7th and 8th panels, above.

Dink's work, it seems to me, is certainly interesting enough to merit further exploration. I've spent some time digging for more information on this artist and have come up with nothing. On his Stripper's Guide, Allan Holtz, shares some great Dink material here.

Email ThisBlogThis!Share to TwitterShare to FacebookShare to Pinterest
Labels: Roots of Screwball Comics