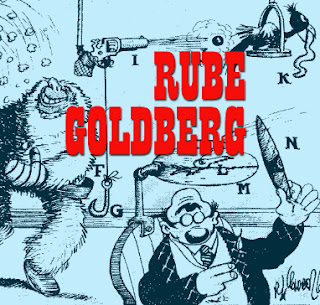 Rube Goldberg's pseudo-scientist alter-ego, Professor Lucifer G. Butts, A.K., first appeared in a 1928 Collier's short story by Rube Goldberg called "It's the Little Things That Matter." You can read that story here and here. A year later, Rube Goldberg began a 3-year cartoon series presenting the inventions of that engineer of over-complexity, Professor Butts. Rube created about sixty of these Butts masterpieces from 1929-1931.

The character was an instant success, despite the odd fact that Professor Butts never actually appeared in the series named after him, The Inventions of Professor Lucifer G. Butts, A.K. We get to know the Professor through his inventions, and through the brief bits of text about him in that appeared on the left side of the cartoon. He was forever knocking his head into things, or falling into machinery and emerging with new inspirations. (It's an interesting diversion to ask who is writing the text about the inventions, if not Butts?).

Here's his amazing solution for cutting cigars -- an invention that includes an Eskimo and a Zoovle-Pup (one of Rube's many made up animals):


In the cartoon above, we learn that the absent-minded Professor waked through a glass door. Despite his Godot-like presence, the Professor was a hit with readers. Here's a letter from the September 28, 1929 edition of Collier's: 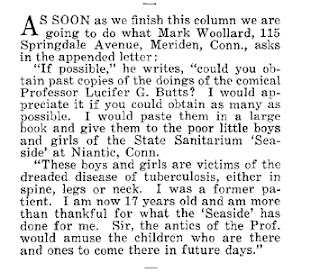 Few people know about this series, or the actual publication history of these invention cartoons, which have been oft-reprinted (one was the basis for the United States 1995 commemorative stamp). Fewer still know that Professor Butts was also a star character on a popular radio program.

To help boost circulation, Collier's magazine sponsored Collier's Radio Hour -- a weekly show with content based on what was appearing in the print magazine. The show appeared in the prize prime time slot on Sunday evenings. An actor portrayed Professor Lucifer G. Butts, although Rube Goldberg did appear in at least a couple of episodes as himself. Collier's ran regular ads in their magazine, promoting the show and often positioning the Professor as a star attraction.

I've searched high and low for a recording of the radio version of Professor Butts, but have yet to find anything. If anyone out there has any audio of this, please contact me -- Paul Tumey -- at paultumey@gmail.com.

I have, however, found a few descriptions in newspapers of the audio version of the professor that provide a good idea of the standard approach to the character. Here's one:


To Rube's credit, he refrained from actually depicting the Professor in his Collier's cartoons (except as an illustration in his 1928 short story introducing the character). By leaving the Professor's appearance to the imagination, the character assumes a far more potent wackiness that any literal depiction -- even one by the great Goldberg -- could only disappoint.

In later years, however, Rube did give form to the Professor in a few sketches, such as this one, reproduced in his 1968 book, Rube Goldberg vs. The Machine Age  (the original art was in black and white -- I've added color, here):

Be sure to check back tomorrow for another Rube Goldberg invention cartoon. And don't forget -- be sure to visit the official Rube Goldberg Machine Contest to see the ELEVEN FINALISTS (just announced today!) for the 2013 Online contest. While there, you can vote for your favorite -- the winner will score the coveted "People's Choice" Award!

A Simplified Can Opener


Yours In All Things Great and Screwball,
Paul Tumey