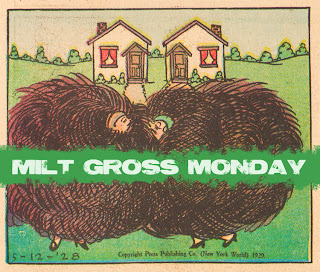 This feature gave the world the once popular catchphrase, "Iggy keep an eye on me!" The basic frame of the strip is the same in every episode: The Count escapes from the Laughing Academy, leaving his (imaginary?) dog pal, Iggy, behind. Out among the normal and sane folks, the Count sees episodes of people doing such nutty stuff that he runs back to the relatively saner asylum and Iggy, begging "Iggy, keep an eye on me!"

The theme of insanity in everyday life is one that was introduced into comics and developed into a rich wellspring by Rube Goldberg. Gross and Goldberg were pals, and there's no doubt that Gross was heavily influenced by Goldberg's methods of reaching for the funniest image over the best-drawn, and of deriving humor by revealing how no one is spared from moments of sheer screwball behavior.

Today's offering is a very early episode of the comic, scanned from my own paper collection, complete with the original Bananna Oil topper. Gross' Banana Oil is very similar in concept to Rube Goldberg's cartoon series, Baloney, which became a catchphrase: "No matter how thin you slice it, it's still baloney!" Gene Ahern, that other towering screwball cartoonist, would occasionally have his characters utter "pickle smoke!" in the same vein.

This page has The New York World cutline at the top of the page. The World was one of the first papers to hire Gross, publishing his Gross Exaggerations column, out of which grew the Nize Baby comic. In 1931, Gross was hired into the King Features group of cartoonists by William Randolph Hearst, and his comics saw a much higher circulation, winning him national popularity. The pre-1931 Gross Sundays are especially fresh and edgy, taking chances and boldly striding into place few other newspaper cartoonists dared to go.

I've mentioned before that Milt Gross' Sundays are about the comedy of escalation. This comic is no exception, as the neighboring wives compete with each other to see who can acquire the largest fur adornment until they become, um, grossly puffed up in the sublime wordless 11th panel -- a perfect visual metaphor of the inflated ego. There's another joke in play as well, as the men work ever harder to support this insane prideful competition.

In the end, the Count bikes furiously back to Nuttycrest and his canine pal Iggy. I've always thought it was funny that Iggy wears a Napoleon hat, a cartoon symbol of insanity -- he's there as a fellow inmate!