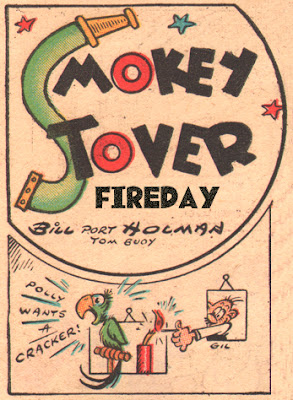 
Bill Holman's Smokey Stover is packed with crazy inventions. Aside from the ways Holman plays with the form itself, which are a kind of invention, Holman also engineered some pretty nutty stuff. Take the two-wheeled car, for example. I'm not sure where you'll take it, but you won't get far... because it only has two wheels. The curious "hand" chairs the characters sometimes sit in would be another classic Bill Holman screwball design. One of many such devices.

The idea of making nutty inventions the subject of humor cartoons comes, of course, from the great Rube Goldberg, whose very name is synonymous with "wacky invention." A Goldberg invention is usually thought of as a complicated chain reaction that produces a trivial effect, such as lighting a cigar, or hammering a nail. But Rube also populated his panels with a host of nutty inventions that were often used as props to add layers of screwballism to the the comic strip. Sometimes, his characters themselves were inventors, such as BoBo Baxter.

Bill Holman obviously learned a lot from Rube Goldberg. One of the things he learned was that the public adores wacky inventions in cartoon strips.

In the New Year's Day misadventure below, from Jan 1, 1939, we can see some of the odd objects and devices that Holman invented and then used repeatedly in his comic. In the first panel, there's both the hand-chair and the double-barreled pipe -- both common props Holman recycled in Smokey Stover for years. In panel six, we get a version of his improbably two-wheeled car. 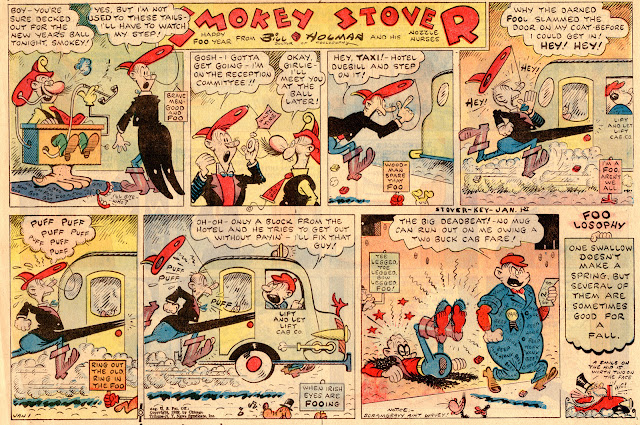 The double-barreled pipe may be the first wacky invention in Smokey Stover, making it's first appearance in the second published comic, protruding from underneath the dust-broom mustache of Chief Cash U. Nutt. It's funny enough that a fireman smokes a pipe, but Holman took the gag one notch higher. Or should we say two bowls deeper?

Sometimes, real-life inventors and engineers made actual versions of the wacky inventions found in screwball comics. Here's an item from a 1939 issue of Popular Science about someone who, um, matched, Bill Holman's double-barreled pipe (cough cough):

The pipe was developed by a tobacco shop in New York City. This might be the pipe that Uncle Bill posed with in this great photo, also from 1939: 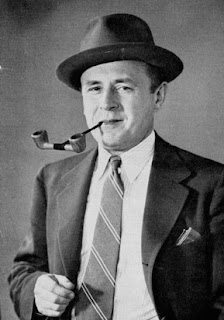 Okay, time foo me to pipe down and end this puff piece.