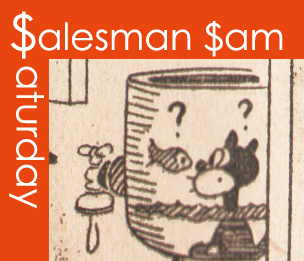 Here today a quartet of Swan $alesman $am comics festooned with cats and fishes.

Sometimes, screwball comics contain lots more stuff than the average comic. I first discovered the joys of comics that are stuffed to the gills with Kurtzman and Elder's Mad comics. Elder called the myriad multiple gags he packed into his comics "chicken fat," referring to the little globules of melted fat floating at the top of a bowl of chicken soup -- in other words, the little bits that add a lot of flavor and savor. With my screwball comics project, it's been a continual joy and revelation to discover that other cartoonists added "chicken fat" details. It seems to start with Walter Hoban (although I am starting to think that maybe it goes back to Outcault's Yellow Kid) , develops with George Swanson, and reaches an apex with Bill Holman's Smokey Stover -- and then Kurtzman and Elder (and Wood) made chicken fat an essential ingredient in their humor comics recipe that led to Mad, one of the most suksessful humor magazines ever.

Enuff of de history lesson, Tumey -- get to da comics! Swanson drew $alesman $am as if he were packing to go on a long journey, stuffing every nook and cranny with potentially useful stuff. He seemed to particularly enjoy drawing cats and goldfish in the corners. Often there's no gags in these animals... the drawings are funny enuff.

Swanson called attention to his "chicken fat cat" practice in June, 1924 by reprinting a request from a Mrs. Ethel Smith to "draw a picture with a lot of cats in it."

Whether there was actually a letter from Mrs. Smith, or Swan made it all up, the result is a wonderful daily comic with a terrifically funny picture of a lot of cats. In the daze that followed, Swan shoehorned in more cats and goldfish. See if you can spot 'em...


There's more continuity in these "chicken fat cat" details than there is in the main story line -- I think it's safe to say that Swan has significant creative motivation in drawing these little cats and fishes.

Screwball comics seem to exist in the tension between the need to create a recognizably and comfortably familiar daily experience for the reader and the artist's chaotic impulse to render the images that bubble up from his unconscious at the moment pen touches paper. Nature abhors a vacuum and so did the masters of screwball comics.

Elder said he added something like 120 background gags to a six-page Mad story in part because Kurtzman's scripts, layout, and editorial hand were so well developed he began to fixate on the background as place where he could put in his own stuff. Elder's chicken fat was his way of satisfying his need to be the constant clown that he was in the rest of his life -- and he had a great precedent in the screwball comics he and Harvey grew up reading and appreciating. Just as I delighted in the background details in their Mad stories (which were reprinted as delicious color inserts in early 80's Mad giants), Kurtzman and Elder grew up savoring the chicken fat of George Swan, Bill Holman, and others.

But aside from all that high-falutin'comic theory, these are just some great kat kartoons -- thanks, Swan!

Just in case anyone is interested in reading my own cartoons and comics, I just posted a new webcomic on my Tumeland blog: 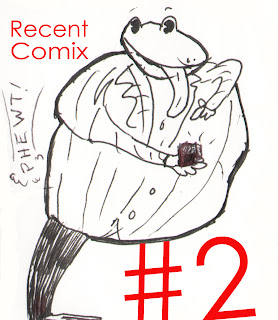 Yowling at the moon,
Paul Tumey 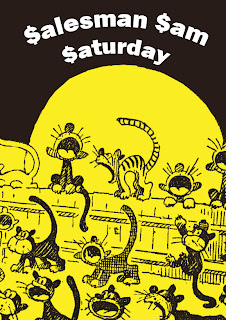