Milt Gross Teaches Us How to Learn - The Screwloose Way (1930) 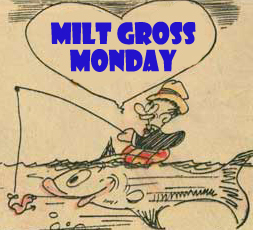 We don't usually associate Milt Gross, the master of screwball comics, with moral lessons and parables. As today's example shows Gross' work is actually filled with trenchant observations of humanity's craziness that could be seen as a sort of textbook on how not to live. This wisdom aspect of screwball comics is actually a fairly common element. Starting with Rube Goldberg's Lunatics I Have Met in the early 1900s, screwball comics embraced insanity in a way that actually shows the reader the logical and expected result to expect from certain choices and attitudes. I sometimes think that screwball comics at their finest are sublime depictions of people tossing and turning as they sleepwalk through life. They are delightful because they are -- in essence -- saying something about the dream state most of us are often in, whether we realize it or not.

Today's Milt Gross Monday comic is another in his Count Screwloose series. In this episode, Gross explores the idea of book learning versus acquired experience. As usual, he presents us with a character that takes things to the absurd extreme. The gag is yet another variation on Gross' comedy of escalation, as the self-made man, a skeptic of academia, journeys with great expense and bother to the far corners of the world to learn the exact  knowledge that was first offered to him in a classroom.

Have you ever noticed that sometimes it's not possible to teach someone something simply by telling them? We often must go through our own elaborate Milt Gross style comedies to be able to see what was in front of us the whole time.

The strip is framed with the usual Count Screwloose structure - the Count escapes from Nuttycrest, leaving his pal Iggy (a dog with a Napoleon complex) in tears at the separation. The Count then becomes our surrogate in the "sane" world as he quietly observes. At the end, overwhelmed by the nuttiness he has silently witnessed, the tiny Count (who is stranded in a distant foreign land) rides on the back of a fish back towards Nuttycrest, dreaming of reuniting with his pal, Iggy.

The art on this page reminds me very much of Sergio Aragones.

Note: I'm not sure if anyone noticed, but we skipped the last two days due to technical difficulties. We have now resumed our normally scheduled broadcast.