The Squirrel Cage - Inspired by Goldberg, Herriman, and Segar 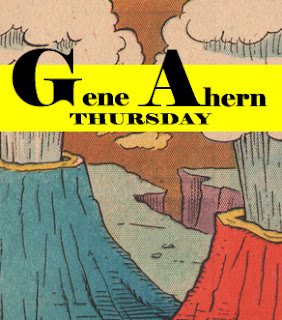 Here's one of my all-time favorite Squirrel Cage pages by Gene Ahern. It takes place about one year into the Foozland continuity, when the tall, super-powerful Paul Bunyan has been transformed into a short, white-bearded, beach-ball shaped gnome -- a sort of echo of the "Li'l Hitch-Hiker" (as Ahern spelled it).

For about five years, the gnome makes his way, from left to right, through Foozland and environs (such as Goomia). In this period, each episode reveals another funny, screwball aspect to this magical land. My friend and fellow comics scholar Frank Young recently observed that the Foozland continuity is like watching a five-year long train go by, where you can look into each passing boxcar and see something pleasantly baffling.

The Squirrel Cage, and in particular the Foozland story, is a rich reading experience, in part because Ahern is able to climb the rocky hills of his hidden sub-conscious, creating multiple resonances and meanings within a seemingly simple cartoon. In today's comic, we get a rib-tickling parable about the unknown effects our actions have on others. We also wonder about the sanity of the never-seen engineers of Foozland...

More than one comics colleague has observed that The Squirrel Cage contains elements of George Herriman's Krazy Kat and E.C. Segar's Thimble Theatre. Today's classic Squirrel Cage episode reminds me of the the unforgettable Krazy Kat page that depicts the clapping mittens of Monument Valley. 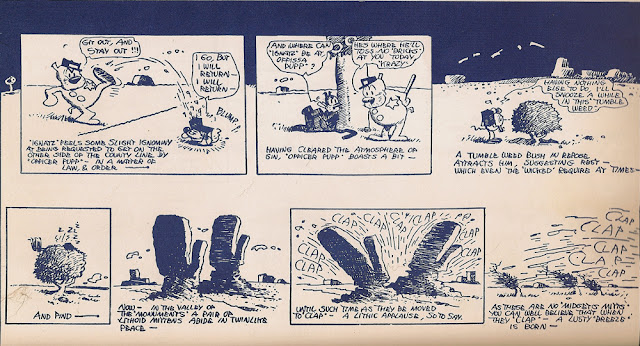 Was this deliberate on Ahern's part? It's impossible to say for sure, but one wonders if he kept a collection of Herriman and Segar comics in his backyard studio workshop, from which to draw inspiration.

We can add the influence of Rube Goldberg on Ahern, as well. Ahern came into newspaper comics about 10 years after Rube Goldberg, and it seems evident that he modeled his first works and his general approach on Goldberg. Ahern even drew some "crazy invention" comics very much like Rube's.

Thirty years of growth as a cartoonist later, Ahern is able to concoct Goldberg's goofy inventions, Segar's knack for eccentric characters, and Herriman's landscape into his own masterful brew. In today's Gene Ahern Thursday post, we see a sublime example of the Ahern recipe for screwball.

Don't miss tomorrow's Smokey Stover Friday!
Till then, make sure you don't pull the road lever --