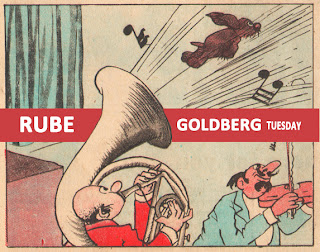 When you read these, it's important to realize that while they naturally seem old-fashioned to us citizens of the 21st century, they were also somewhat anachronistic back in 1936. In the thirty-odd years Rube had oddly cartooned, comics had shifted. By the mid-30s, the more successful comics were adventure-oriented or laced with heart-tugging sentimentality. Screwball humor -- the Rube Goldberg kind -- was fading fast. The superhero was soon to emerge in comic books. Comics as a commodity were in radical flux. Rube's Lala Palooza, then, was some of the last screwball gold from this master that the times permitted.

Rube had even tried his hand at straight, adventure type comics in the mold of Little Orphan Annie, with Doc Wright, a daily melodrama about a country doctor. Even though the strip was commercially successful, Rube  hated it, and dropped it after 7 months, returning to screwball humor with his next creation, Lala Palooza. Here's the first Lala daily, which introduces the cast of characters:

Rube's new distributor, the one-man Frank Jay Markey Syndicate, promoted Lala as a return to form, not just for Rube, but for comics and the American public, in general:

"The peak of interest in the heart-wringing, tear-jerking, hard luck serial has turned. The depression emptied everybody's tear ducts... The time has come for the strip with SMILE." (Frank Jay Markey promotional material)

Rube's new humor vehicle started out strong. As Peter Marzio, Rube's biographer, writes, "The Goldberg-styled furniture and architecture, the slam-bang antics of Lala, and those beautiful names (Professor Zeero) signaled another Goldberg coup. As in the early days... Rube added extra jokes in side and top panels, cramming each episode from his broad arsenal of humor." (Rube Goldberg: His Life and Work by Peter Marzio, 1973, Harper and Row).

Lala was a 7-day-a-week strip, with color Sundays. Here's two of the very first Sundays from consecutive weeks. Here, we see Rube playing with his new sandbox, selecting the chaos-causing Pinto, "Lala's pet whatsis and universal pain in the neck." In the Sunday below, Pinto destroys a raft of priceless antiques and attacks a police officer, allowing a criminal to go free. Lala, awash in her maternal instincts, is unable to see any harm in Pinto's actions, but the chaotic canine eventually does face the music. Note the trademark Goldberg statues in the splash panel, and the fun characters in the background.


"The fourth dynasty of Ipecac," is a pretty swell gag, too. Ipecac was a medicinal syrup, long in use by the mid-30s, that induced vomiting. It's still made today!

Rube's other Sunday screwball comic, the long-running Boob McNutt (1915-34) featured the adventures of a well-meaning incompetent and his considerably more appealing doggie, Bertha, the Siberian Cheesehound.
Lala is another incompetent character who is comically unaware of the effects her choices have on others. Unlike Boob, she is over-indulged, over-weight, and over-privileged. Her pet dog Pinto is, of course, a mirror of her owner's personality. The problem with Lala, as Rube soon saw, is that she's goofy, but not in a likable way. She's a genuine high society matron, and her sense of privilege is alienating to the reader. Perhaps Rube's original thinking was to poke fun at the overfed wealthy class, providing a kind of screwball catharsis for the common American who had just struggled through the country's worst depression. In the next week's Sunday, Pinto satisfyingly disrupts a high society cultural event in the grand tradition of the older screwball Sunday extravaganzas.


A page like this would be commonplace in American Sunday newspaper comics from the teens through the 20s. In 1936, it was a rarity next to Dick Tracy, Little Orphan Annie, Terry and the Pirates, and Flash Gordon. Rube Goldberg had not changed, but the world had -- and that somehow diminished his creative genius in creating screwball comics. You can really only understand Lala Palooza when you realize that it was Rube's attempt to modernize his screwball humor -- in hindsight, maybe Rube compromised too much.

Rube eventually slimmed Lala down, making her more visually appealing. She became a background bimbo in a series of screwball adventures (you can read one of those sequences here). As Marzio writes, "Rube drove himself to bring her (Lala) up to date; but the harder he tried, the more he grew to hate her." After a couple of years, Rube grew tired of Lala, and ended it without making a, eh,  lala palooza out of it.

A big thank to George H. for his help on this one!

That is all,
Screwballooza Paul