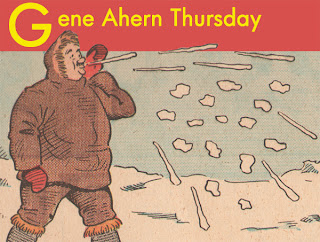 Here's a double-trouble Gene Ahern post, all about the power of words. William Burroughs said "language is a virus," and I think it's quite possible that he and Gene Ahern would have had a fascinating conversation, had they ever met.

Today, we offer you, Dear Reader, two for the price of one. Or, more precisely, the considerably richer sum of the parts -- rather than just one part. Presenting what collectors call a "full." Here's the whole page of Ahern screwball madness from January 17, 1937, with The Squirrel Cage at the top, and Room and Board at the bottom.

This arrangement, with a half page devoted to each comic, is how Ahern intended his Sundays to be published. Sadly, The Squirrel Cage was often dropped to make room for advertising. In the 1940s, newspaper editors felt free to chop the page up and publish Ahern's two comics pages apart. What's worse, after 1941, nearly all newspapers published The Squirrel Cage as a two-tier "third," instead of a three-tier half-page, as Ahern appears to have drawn it throughout the run. Whenever you can find a Squirrel Cage original from the 1940s, it's always a three-tier half-page. This means that, even if one could manage to collect the entire published run of The Squirrel Cage, it would still be missing roughly a third of the original intended work.

Knowing the sad fate of Ahern's best work in the 1940s makes a page like the one below all the sweeter to behold. Taking it from the top, we begin with a predictably nutty Squirrel Cage take on ventriloquism. Next, the Room and Board presents us with choice episode of Judge Puffle's tall-tale adventures. On this date, Room and Board exceeds The Squirrel Cage in sheer nuttiness and surreal screwballism. The idea of the Judge's words being frozen and only audible some time later, when they thaw out, is pretty swell. Ahern's stiff drawing style somehow adds to the humor. Art Spiegelman has observed that Ahern's humor "explodes against the rigidity of his visual style."

Taken on their own, each of these strips is pure fun. When seen together in their intended context, however, we begin to sense a resonance in theme. In this case, Ahern is exploring the idea of language. The Squirrel Cage considers how easy it is to misunderstand words out of their context and divorced from their true speaker. Judge Puffle's fantastic scenario is a visual metaphor for how the words the utter can have a delayed effect. Each on of those icicles is a comic strip -- composed weeks before they will be read by the public.

I don't mean to imply that Ahern consciously embedded a semiotic essay into the Sunday funnies. More likely, he was able to tap into his creative consciousness and emerged with these gems. Enjoy!


Screwily Yours,
Paul Tumey
Posted by Paul C.Tumey at 10:01 AM

Email ThisBlogThis!Share to TwitterShare to FacebookShare to Pinterest
Labels: Gene Ahern: Room and Board, Gene Ahern: The Squirrel Cage, Thursday