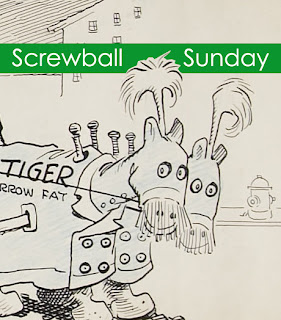 I have often observed that many of the common elements of screwball comics appear to originate with Walter Hoban's Jerry on the Job. he was the first to shoehorn in funny signs and background details. He also pushed the plop take up a few notches for comic exaggeration. I've  enjoyed writing about how the criminally under-appreciated Hoban played with shifting backgrounds and language.

You can see bits and pieces of all that in this collection of Walter Hoban original art scans I have put together for you today. the large scans allow one to savor Hoban's inking, similar at times to Herriman's, but with it's own distinct "voice." It's a hatching bonanza - enjoy!


Jerry typically and densely misses the point, causing a female to plop...

Jerry does the pneumatic flip take in this one...

Yes, you read correctly - there's a service called "Uncle Tom's Cab." Sigh.  Did folks really think that was funny back then? I hate to say it, but probably so. A fair amount of Hoban's material played with stereotypes of black Americans -- which could be one reason his work has fallen out of favor. Check out this virulently racist 1921 fragment written and illustrated by Hoban that I recently discovered on the reverse side of an E.C. Segar Five Fifteen comic:


Here's a striking panoramic daily of a medicine show -- another aspect of of our culture that has evolved since 1930.

My last example for you today is undated, but is thought to be from 1922, perhaps Sept. 22. Check out that spectacular wipe-out in panel 3, subtly different from Hoban's similar last panel flip takes.

Hoban was a master cartoonist -- look at the terrific left-to-right movement in the first two panels, with the call of the steam engine train perfectly inserted. The energy sets up the wipe-out in panel three.