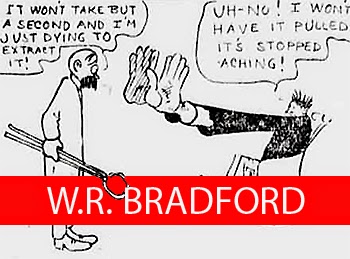 Yesterday, I had a tooth pulled. I confess, I was quite brave. I went in with nary a protest, and uttered only two groans at the procedure's most intense moments. Yes, friends, my bravery was eclipsed only by the year of avoidance I invested before so courageously arranging myself into the dentist's chair. To celebrate both my hour of bravery and my year of cowardice, I share in this post with you an episode of the daily comic strip John Dubbalong, by screwball master W.R. Bradford.

Walter Bradford worked in newspaper comics for roughly the first quarter of the twentieth century, passing away in June of 1925 at age 53. His thousands of forgotten comics display a remarkable flair for screwball comedy, embracing anarchy, obsession, and insanity. In many ways, his stuff is as "out there" as Milt Gross, and in some ways a great deal screwier. His drawing style is, at first look, rather crude, but it is actually part of a now-forgotten school of comics that George Beckenbaugh (who worked under the name "Percy Winterbottom") in which the crudeness of the drawing is part of the joke.

Even though Allan Holtz's excellent resource, American Newspaper Comics: An Encyclopedic Reference Guide lists 33 comic strips by W.R. Bradford, John Dubbalong is not one of them. As near as I can tell, the strip ran 1-2 times a week from 1911 to 1914. The episodes were very dense, with lots happening in them. At another post, I'll share more of this rich comic strip.


For now, here's a small bite of John Dubbalong. Note the unusually dense story composition, with five scenes in 10 panels (eleven if you count the panel-within-a-panel). The last scene shows dental instruments madly dancing and singing an original song. Bradford was fond of writing silly verse, and built one of his most popular strips, Jingling Johnson around it (Johnson was a self-caricature of Bradford). Mysteriously, we are told the song is sung by a "quartette" of dental tools, but only three are shown -- either a sign of the haste with which the strip was composed, or another joke.

How about that 8th panel, with the Winsor McCay style distortion?

Given Bradford's status as an early master of screwball comics, and the subject matter of this particular example, it would not be inaccurate to say that this posting may qualify as a true "roots" of screwball comics entry -- although it might coax further groans to do so.

P.S.: If you haven't already, be sure to find the accompanying Facebook group to the blog, The Masters of Screwball Comics, and send me a request to join. Lots of cool screwball comics and other neat stuff posted there every day that never makes it to this blog!
Posted by Paul C.Tumey at 3:31 PM No comments: