Why Don't He Twitt? An Insane 1928 Milt Gross Nize Baby

Here's another close-up appreciation/dissection of a gorgeously wacky Nize Baby Sunday page (a paper scan by me from my own collection) by that master of screwball masters: Milt Gross! Every image on this page is a funny drawing in itself -- beautifully composed and perfectly rendered. As if that weren't enuff, the writing is devastatingly funny - why don't he twitt? Indeed -- the tribulations of making the twitt toy twitt, getting the gimcrack do the thing it's supposed to do, but which it mysteriously won't. It's an existential dilemma to which we can all relate.

When you consider the hex-quizz-it visual screwballism of Milt Gross' Sunday comic, Nize Baby (9/12/26 - 2/10/29), it's surprising to learn that it developed from a written column. There's an organic flow to Milt's work. One creative output naturally leads to another, and they are all part of an entire dingbat universe.

In the mid 20's Milt Gross wrote a syndicated column called Gross Exaggerations, sprinkled with his cartoon illustrations. These were included as part of a Sunday supplement magazine that had humor pieces by Ring Lardner, celebrity gossip, and so on.

The columns were filled with the conversations of New Yawk City Jewish mothers leaning out of their tenement windows to chat in hilarious American-Jewish dialect. Often, Gross divided his columns into what was being said on the various floors.


In short order, the mother with the "nize baby" on the fourth floor began to dominate the columns with her Yidd-English versions of classic children's stories. It's a little hard to read the muddy microfilm scan above, so here's a transcription of the first few sentences:

"Fourth Floor: Oohoo, nize baby it opp all de Pust Tustizz, so momma'll gonna tell you a Ferry Tale from Bloobidd. Wance oppon a time was leeving a nobbleman in a cestle wot is was by heem blue de wheeskers. So all the keeds from de neighborhoot dey gave heem a neekname, "Bloobidd." (Nize baby, take anodder spoon Pust Tustizz)" (From Gross Exaggerations, November 15, 1925 by Milt Gross)

It works best to read Milt's prose out loud, and I imagine many folks cracked each odder up at the the time, doing that just that. The above tale of Bluebeard the pirate makes mention of "Pust Tustizz," the breakfast cereal called Post Toasties.

So that was Sundays. Then, during the week, Gross Exaggerations was a daily comic strip, mostly visual humor! Here's an example from around the same time as the column above:


Milt said he got the idea for Nize Baby from his wife: "I went home... and found that one of my children was misbehaving and wouldn't eat his supper. My wife was striving to comfort him with a recitation of 'Sing a song of sixpence,' but he wasn't to be comforted that way. So, suddenly on the wings of inspiration... I broke into a recitation of the same verse in Jewish dialect, 'Seenk a sunk from seex pants,' with the result that Mrs. gross burst into a pal of laughter and the child was diverted, too. Afterwards, at my wife's suggestion, I worked the thing up into the form of a mother telling a fairy tale to her infant and called it Gross Exaggerations." (Success Magazine interview, 1926)

The popular column was collected into Nize Baby, a book published by George Doran in 1926 -- Milt's first book. Here's what the first edition looks like. (You can buy this copy for a mere $550 from here). 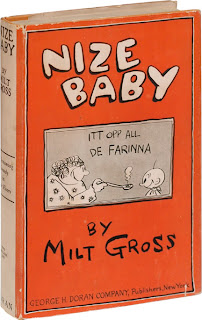 This book (in a later edition, minus dustjacket) was my very first introduction to Milt Gross. Kevin Lacke, my college chum and fellow "bookie" at Bill's Bookstore in Tallahassee, Florida produced this book one drunken evening at his apartment. Kevin, a talented actor, adored the book and proceeded to perform a few of the pages for me in a perfect recitation of Gross' anglicized Russian-Jewish dialect, to my great delight. Somehow, in time, I managed to persuade Kevin to sell his copy of Nize Baby to me. I still have it!

Starting in 1926, on September 12, Nize Baby became a full color Sunday comic, topped by the single tier Banana Oil comic. So there's your hee story lesson. Now, for the fun!

Here's a delightful Nize Baby Sunday from August 26, 1928 that shows off both the visual and the verbal joys of Milt's screwball talent. If the page looks familiar, it's because it was included on page 289 of Bill Blackbeard's and Martin Williams' The Smithsonian Collection of Newspaper Comics (1977).  Printing technology being what is was 34 years ago, the reproduction of the page is pretty muddy. Even so, this page was, for me, a standout in an amazing collection, and made me a lifelong Milt Gross fan. I recently was fortunate enough to acquire the actual page myself, and can now provide a creesp scan for you!

As with the previous Milt Gross Sunday page I've shared, I'll provide nice large versions of each panel that you can scroll through. However, to get started, here's the entire page, in a large paper scan from my own collection:


We have 14 panels in four tiers. The first two tiers are composed of three panels each. This allows Milt to work in a couple of "double-wide" panels that establish the living room scene. The bottom two tiers have more panels, with quicker beats, reflecting Pop Feitelbaum's escalation from amusement to annoyance to enraged insanity.

A word about Milt Gross and escalation. Many of his Sunday pages and later comic book stories are built around escalation. If you diagrammed the level of emotional intensity in these pieces, it would almost always be a sharp curve upward. This is mirrored by an ever-increasing series of calamitous events. Gross always pushes the joke out to the borders -- into screwball territory. It's been said that, when Chaplin came up with the idea of the tramp pretending he can walk a tightrope in The Circus, Gross (working for Chaplin as a writer at the time) was the guy who came up with the additional wrinkle of a circus monkey dropping a banana peel onto the wire in the tramp's path. Escalation.


In panel one, the squeaky toy is introduced. Don't you just love the goofy design of the toy? 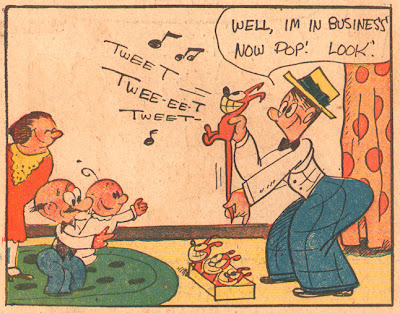 In panel two, one toy is left for the nize baby (who's name happens to be Ignatz -- perhaps a tip of the hat to Herriman). When characters move in a Milt Gross comic, they almost always produce a perfect little dust cloud. 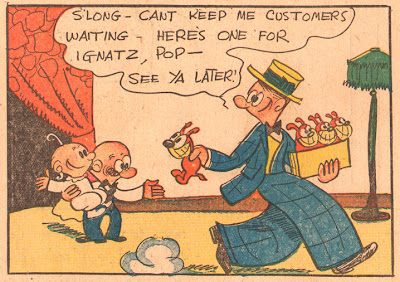 Pop has drunk the Kool-aid. He now has the expectation the toy will give a twitt and delight baby. We know different from the first time we read the comic. 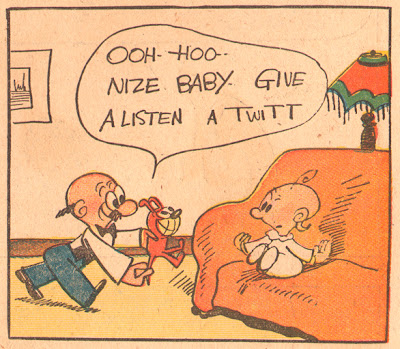 Gross' writing is all about phonetics and timing. He could have written so much more here-- but the 'Hm!' is all that's needed. Check out the composition here, too. The way the couch arm fills the space between the stretched tail and Pop, helping us really feel that stretch of the toy. 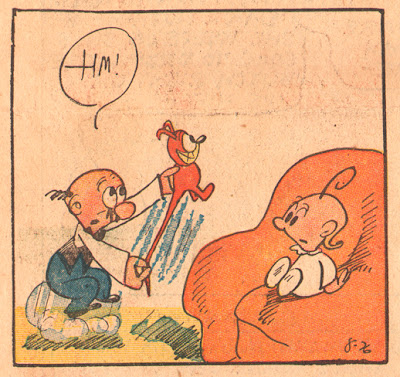 There's something beautifully funny about pronouncing "tweet" as "twitt" when the toy is broken. Pop's question is a an archetypal moment every person in the modern world asks - when the car won't start, when the email you just typed vanishes, when the computer won't start, when the DVD won't play. Imagine what Milt Gross could have done with today's car alarms and forever ringing cell phones. Somehow, Screwball comics are inextricably tied to our struggles with technology. 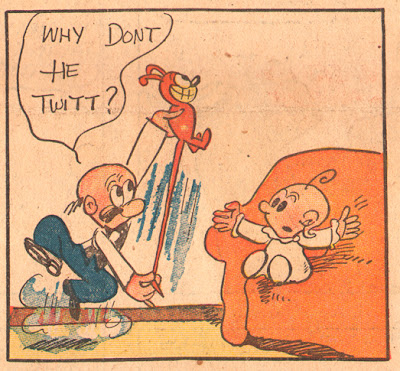 The wide panel emphaisizes the streeeeeeetttttch. Pop is a resourceful guy -- he always a has solution... ... and it usually backfires -- in this case, literally so. 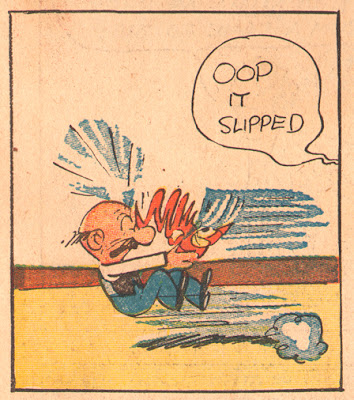 Poor Isidore. Izzy is often the recipient of a spanking when things go wrong. I don't spank my kid, but I do identify with Pop. So many times, I've done something stupid, or something was knocked over or broken and I have (I blush to admit) turned to my son and blamed him! Such is human nature! (I apologize to him when I get my cool back). Maw is totally unconcerned about the spanking... 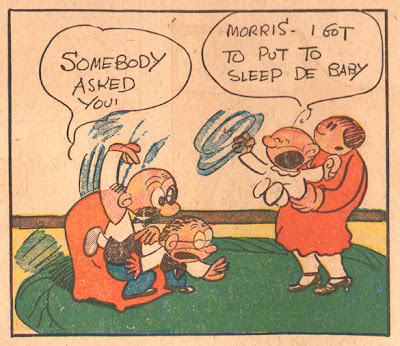 Pop to twitt toy: You realize this means war. 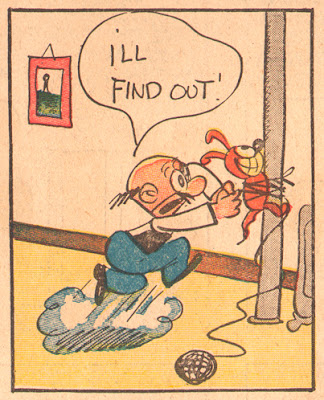 Even using an old fashioned hearing trumpet... no twitt. This is exactly the same sort of thing I go through when the furshlugginer computer suddenly acts weird -- you try one crazy thing after another. 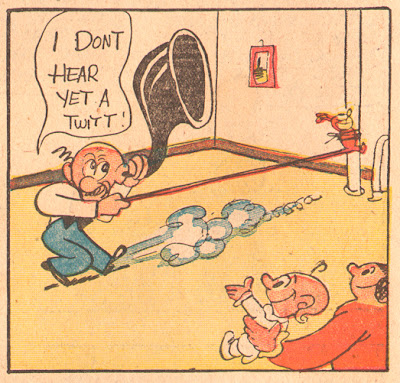 Definition of insanity: doing the same thing over and over, expecting different results. 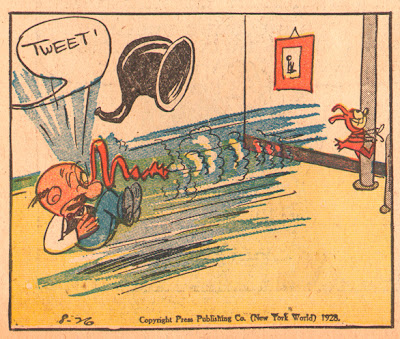 But hark! A twit appears on the scene, twitting! Look at how Milt lets his line scrawl on Pop... his fury has distorted his form. 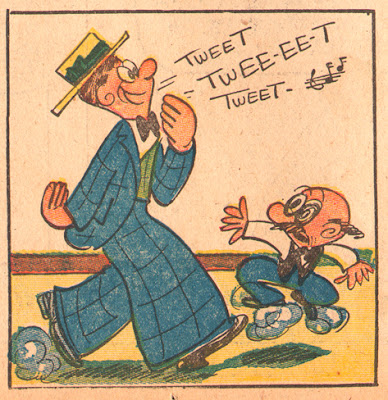 The pay-off... an incredible back-flip plop take, caused only by a little tweeting toy. 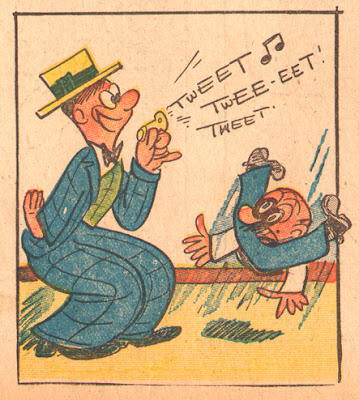 And Maggie's dishes, Ignatz's brick, Jerry's body are hurled once again.... the end. 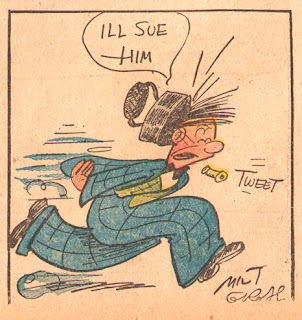 Whew! Great stuff! These comics grossing on you? Wanna see more? Lemme know! Crickets are chirping on this blog, tumbleweeds rolling through....

For more Gross Exaggerations and hilarious rare early comics by Milt Gross, be sure to check this post at Ger Apeldoorn's Fabulous Fifties blog.

And see my earlier post for more Nize Baby:
Have a Gross Sunday -The Apex of Loose-Scrawl Cartooning

Wanna see what sort of comics a guy who studies screwball comics makes? Then click here. 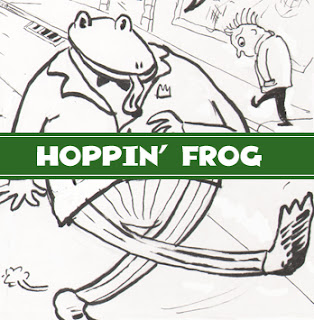