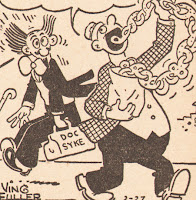 Sure to cure what ails you - here's a double dose of Ving Fuller Doc Syke dailies from 1945, the strip's first year. Doc Syke ran as both a daily and Sunday from 1945 to 1960. It was a terrific concept -- to pour Ving's offbeat sense of humor into the character of a psychiatrist. One of the things that makes the strip exquisitely screwball is that BOTH the Doc and his patients are wacky. Doc, with his wild hair, oversize bow-tie, and long cigarette filter is just as much an eccentric, if not more so, than his patients.

Over the course of its 15 year run, Doc Syke had three different syndicates:

You read that last one right, Ving created his own syndicate. I'm not sure if he distributed just his own work, or carried other comics as well. I'm still still digging!

In the early 50's the strip's name changed to Little Doc, and became a kid's comic strip in the style of Peanuts. More on that in a future post.

In the strip's early years, Ving managed to adroitly make fun of neuroses and complexes without being cruel or unkind. It was Bob Newhart, thirty years earlier. Ving seemed be saying that we all suffer from one form or another of mental illness, including the healers among us. Starting with James Swinnerton and Rube Goldberg, the best screwball comics often seem to have, at their core, a wisdom and perspective on humanity.

Ving Fuller's humorist insight was shaped into a daily and Sunday gag comic that was almost as well-crafted as Ernie Bushmiller's Nancy. In fact, Doc Syke appears to have been modeled visually on Fritzi Ritz and Nancy. The iconic and simple school of cartooning suited Fuller well. Reading a Doc Syke daily, like Nancy, happens in the time it takes to decide whether to read it or not.

By the time he created Doc Syke, Ving had been drawing comics professionally for over twenty years for newspapers and magazines. Laffs in Today's News Dispatches was an early Ving Fuller comic strip that supposedly drew from nutty stories Ving found in the news. Ving's humor, for all its later wisdom and screwball weirdness, was also very topical. Doc Syke was created just as pop psychology was emerging as a fad in America. In the three examples of Laffs below, we see Ving distilling humor from the popularity of aviation as  impractical summer wear (Lindbergh's 1927 flight across the Atlantic ocean had affected fashion) and from Prohibition, which started in 1919 and was still going strong in 1929 (it was repealed in 1933).


Over the years, Ving developed his craft as a screwball cartoonist. Here's a six-panel cartoon that appeared in Collier's Weekly, circa the mid-40s (exact date unknown). It's a well-done, zany-zazzy cartoon that is very similar to Doc Syke. 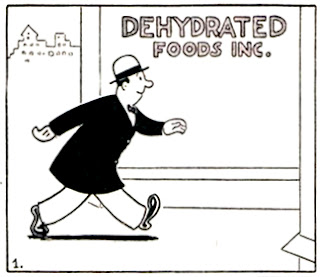 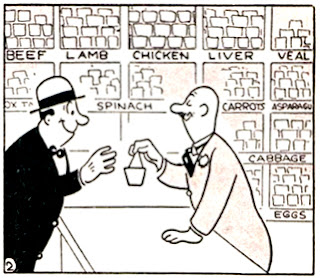 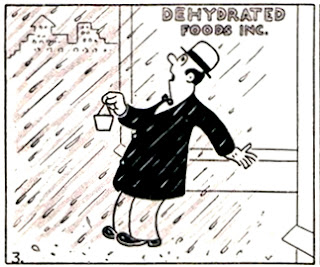 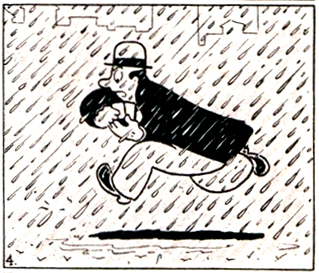 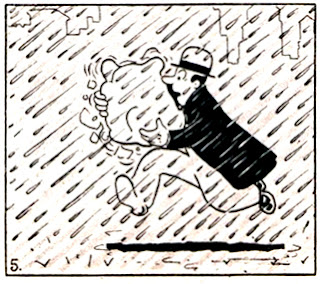 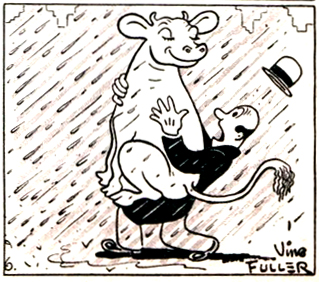 Here's the full(er) cartoon as it originally appeared: 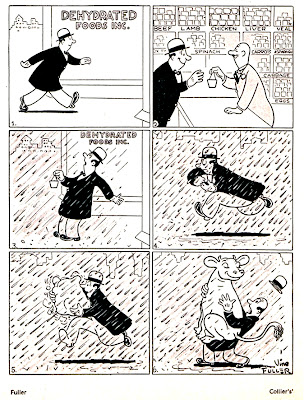 Ving's opening premise, that there could be a Dehydrated Foods, Inc. store, is wacky enough, but the strip gets even nuttier when an entire cow is hydrated in a rainstorm -- all in a six-panel magazine gag -- primo screwballism!

At some point in the early 1950's Doc Syke mophed into a another comic entirely, a kid strip called Little Doc. I'll share some of these in a future post.