A Visit to the Foozland Zoo: Squirrel Cage by Gene Ahern 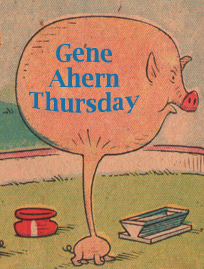 
When he introduced Foozland into The Squirrel Cage, Gene Ahern found a perfect balance of comedy and surrealism. Sometimes the episodes lacked a punch-line and instead were picaresque glimpses of a bizarre alternate reality that followed its own, unfathomable rules.

Today's offering is a visit to the Foozland zoo where -- as you might expect -- you can see animals quite unlike anything in our reality. Like Lewis Carroll, Edward Lear, and Dr. Seuss, Ahern delighted in inventing bizarre new creatures. His Room and Board strips sometimes featured screwball animals (see my post on the weird fish creations in Room and Board).

In the strip below, we are treated to some particularly weird animals -- love that balloon pig! The body-less rolling cow head is a haunting image. The Little Hitch-hiker makes an appearance in the last panel, as Ahern tosses in a Nut Brothers style rimshot joke.