Smokey Stover Rows to the Occasion 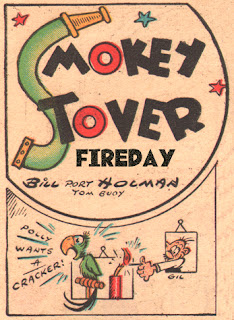 
Bill Holman mines some rich oar in this screwball Smokey Stover and Spooky page from 1941, scanned from my paper collection.

As usual, a gang of wild verbal and visual puns stow away in the page below. I count over 30 gags, but there's probably more I didn't eyespy. Smokey Stover started in 1935 (see here for the first Smokey comic). By 1941, Holman had unleashed a flood of crazy, pun-oriented gags on the adoring public. Even though his pages seem at first glance to be chaotic, Holman -- the Spike Jones of comics -- was actually a highly organized and structured cartoonist.

His pages are visual and verbal jigsaw puzzles, with each oddly-shaped piece customized to fit perfectly. Often, Holman's pages would play with a particular theme. If Smokey was gardening, Holman would plant 25 or 30 garden-related jokes in every nook and cranny of the page. Today's jigsaw features water and boating puns, starting with Holman's signature: "Bill Port Holman, Tom Buoy." Underneath, we get a joke with a parrot, which relates to pirates (and cartoon parrots, as Rube Goldberg and Gene Ahern also knew, are intrinsically funny). Next to the parrot, one of Holman's living portraits is named "Gil," as in fish gill. And Holman is just getting started...


That "pig pen" in the second Smokey panel is the primary reason I chose this page to share -- it's a notch more surreal and bizarre than Holman's usual work, which is already over the top. His rowing machine is a crazy, over-complicated machine, a common element in screwball comics that goes back to Rube Goldberg.

The Spooky strip involves the use of a hose, which is water-related. This strip is pure visual fun. You can "read" this Spooky without having to read the words. Holman's cartooning in Spooky was more sequential and visually flowing than in Smokey Stover, which was disruptive in nature. His wildly configured drainpipes echo the twisted trees in Walter Hoban's Jerry On The Job.

The book in panel four of Spooky is the infamous Joe Miller Joke Book -- no doubt the source of many a corny cartoon joke. Jack Cole included the book in a 1945 cartoon self-portrait:

If you are reading this and happen to have a blog, might I prevail upon your generosity to plug The Masters of Screwball Comics? Let's spread the word and give our sober reality a much-needed dose of nutty, just-for-the-fun-of-it humor!