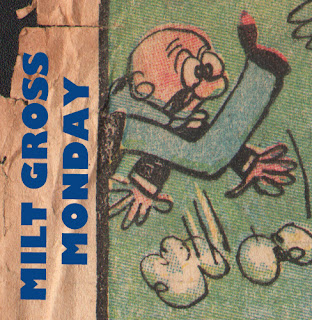 Welcome to Milt Gross Monday! Every Monday I'll post a new scan of a great Milt Gross Sunday or a small group of rare Gross dailies. Or a book illustration or an excerpt from a column, ... chee dis guy wuz whatchacall PROLIFIC!

In case you missed the announcement Screwball Comics is going ballistic this summer, with a post a day. Most folks slow down in the summer. So in true screwball fashion, we'll speed up! Woo hoo!

Today's offering is a scan of a classic Nize Baby page from my own collection. As a bonus, you also get the Bannana Oil topper. For background information on Nize Baby, as well as another great example, visit this earlier posting.

The subject of this page is the excess of the Hollywood movie studios and the public's appetite for spectacle. Gross had some experience with Hollywood and worked as a gag writer for Chaplin, among others. A few years later, he created a long continuity in Dave's Delicatessen about making movies (of which I'll share some examples in a future post). The 30s and 40s were the golden age of America's romance with the movies, so comics about the movie industry had high appeal. 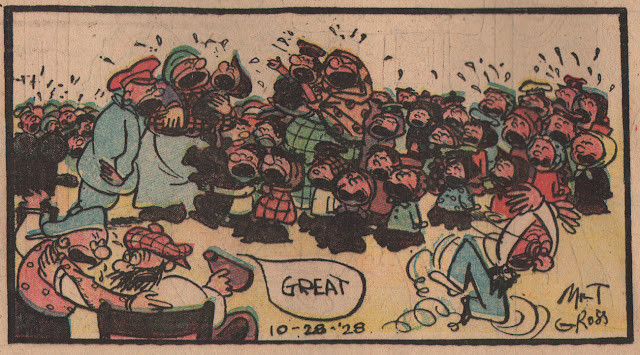 The costumes of the epic cast of actors and extras in the movie suggest the film is about a tragic Russian war, which is interesting, since Gross based much of his humor on Russian-Jewish immigrants. Gross is at his loosest in this page, and yet still conveys some pretty complex visuals, such as a steam shovel digging trenches in Pop Feitelbaum's front lawn and the subsequent panels of comic destruction. The next-to-last panel has over 30 people in it!