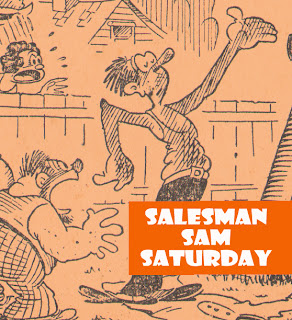 
Here's 6 priceless Salesman Sam dailies from 1923. George Swanson created Salesman Sam in 1921. After the first year or so, Swanson began to develop multi-week long story continuities. Sam Howdy goes out west, becomes a horse-racing jockey, gets sued by a gold-digger for breach of promise, and so on.

Today's Salesman Sam Saturday presents selected episodes from a funny 3-week continuity Swanson created in September, 1923. Guzzlem's wife is out of  town, and the boys decide to have a wild poker party. Sam moves in for a few days and bachelor-based hilarity ensues.

In the first strip presented here, note the great secondary gag (I often call these 'background gags" but this one is in the foreground!). A crowd of dozens of cats stare in wonderment at a poster advertising "Rat Biscuits." At the risk of shooing the humor away from the joke, rat biscuits were poison cakes for getting rid of rats. From a cat's perspective, though, these could be rat-flavored biscuits! This strikes me as casually brilliant. I love the occasional elaborateness of Swanson's non-essential gags. Also, check out those very funny BIG steps forward in the first panel as our characters step into a new mini-adventure.


Swanson doesn't show us the wild party, just the aftermath:

Swanson excelled at the exaggerated reaction. In the last panel of the next strip, the very earth cracks open in reaction to Sam's dense nature.

And the close of the sequence, where -- of course -- the wife returns in a dark cloud of disapproval. This strip presents a beautiful comedic resolution. The last panel looks similar to the Swanson's explosive flip-takes, but is actually the damage of Mrs. Guzzlem's explosion of anger -- which is funnier if NOT shown.


ANNOUNCEMENT - No essay tomorrow! I'm going on vacation for a couple of days. I'll see if I can load up a Milt Gross Monday to automatically post, but I don't think I'll have time to get an essay together for Sunday. We'll resume our regularly scheduled programming on Foosday!

That is all,
Screwball Paul
Posted by Paul C.Tumey at 12:27 PM