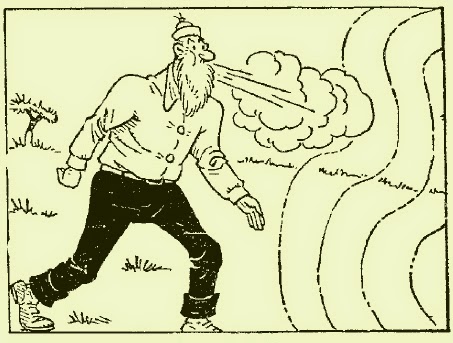 Gene Ahern's masterpiece, The Squirrel Cage, had several interesting phases throughout its approximate 15-year run from 1937-1952.

From 1942 to 1944, Ahern shifted from his wacky inventors (Ches and Wal Nut, who lost their names when the emigrated from the NEA-owned topper, The Nut Brothers to the Hearst-owned Squirrel Cage) and the little hitch-hiker ("nov shmoz ka pop") to detailing the daily life of Paul Bunyan, who was alive and well in a contemporary comic strip version of small town America. Or, perhaps the character is merely a giant who thinks he is -- or is pretending to be -- Paul Bunyan.

The Squirrel Cage is devoid of its signature character, the little hitch-hiker during the Paul Bunyan years, which are filled with Ahern's witty explorations of his imaginary world. In this lyrical episode, from January 3, 1943, we see Bunyan's mysterious super-human powers extend past great strength and massive consumption and labors, as the tall tales depict, when he blows a rainbow.

From his earliest years, Ahern's work embraced goofy imaginary worlds. With his Paul Bunyan strips, Ahern created a more subtle vision of a screwball world, which relegated wacky Smokey Stover style visual puns for poetic imagery that straddled states of consciousness. At times, The Squirrel Cage seeks to subvert the laws of reality and values of mainstream society in a veiled, symbolic way, as if in a dream. In these strips, we see Ahern developing elements of his Foozland phase, which comes next. The shadow, anxiously disconnected from it's owner, is a prime example of a device that later turns up in Foozland. 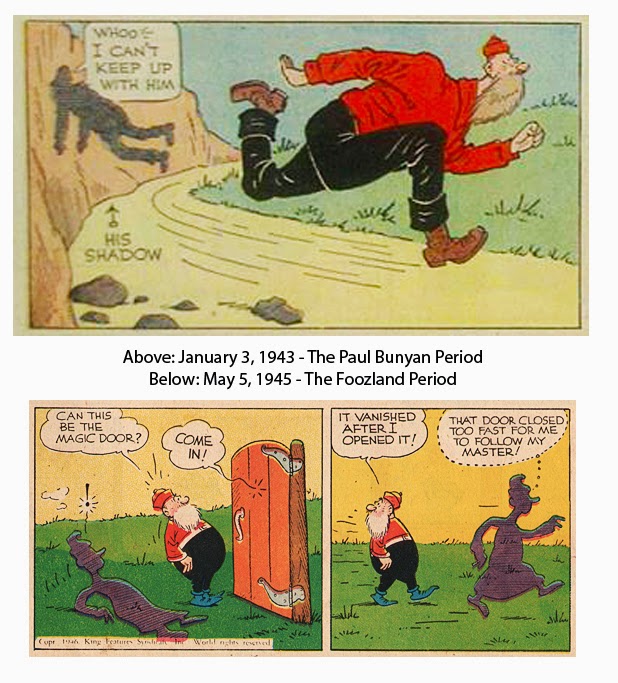 Ahern also refined his visual storytelling technique, as we can see in the episode originally published April 11, 1943 (or in the case of this example, in the Saturday edition and therefore on April 10).
Four of the seven panels in the strip are wordless, and funnier because of this.The paucity of words in general in The Squirrel Cage stands in stark contrast to the strip it topped, Room and Board, which features several extremely verbose characters and draws its humor as much from the comic dialogue as from the visual doings. Compare, for example the windy April 11, 1943 Room and Board that ran below the near-wordless  "windmill" episode of the same date.
It is worth noting that Ahern  greatly streamlined the torrents of dialogue in Room and Board by 1943, particularly in the Sunday episodes. Compared to earlier strips, and to the cloud banks of dialogue found in his Our Boarding House Sundays , the 1943 epistles of Judge Puffle seem taciturn.

The singular Paul Bunyan series (and, as we see above, even certain episodes of Our Boarding House) offers a sly re-imagining and sarcastic commentary on many things, including superhero comics. Paul Bunyan is super-strong and can even fly, covering great distances in a short period of time.The character even has, like a certain dislocated citizen of the planet Krypton, super-vision, as seen in the March 14, 1943 episode, when Bunyan drills a hole through a board simply by "looking sharply at it." This is a far more sophisticated and absrud lampoon of comic book superheroes, which were at a peak of popularity in 1943, than the typical treatment one sees -- and as such, it connects the superhero archetype to the American tall tale in a way that is unique in comics.
News! Thanks to Art Spiegelman, The Squirrel Cage will see mainstream circulation for the first time in approximately 65 years. An upcoming issue of Art Forum will include a marvelous 8-page annotated gallery of comics that Art Spiegelman has been reading and pondering. Among these comics are works by Basil Wolverton, Matt Fox, Chester Gould, and our very own Gene Ahern. I was able to able to supply the scan of the Squirrel Cage strip used in the article, and Art Spiegelman kindly included the URL of this blogsite in the caption.

That is All,
Screwball Paul

All text copyright 2014 Paul Tumey. This article may be re-posted and excerpted if acknowledgement is provided and a rainbow is blown in my direction.
Posted by Paul C.Tumey at 9:48 AM 1 comment: