Say, Are You Looking at A Computer? Rube Goldberg's Foolish Questions 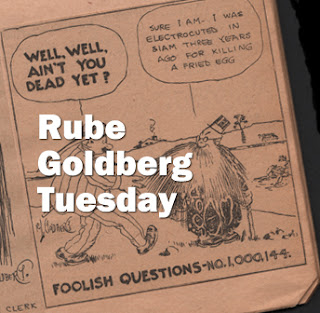 Presenting a look at Rube Goldberg's hit panel, Foolish Questions. Readers like me, who grew up reading Mad, will read these cartoons and see a connection between Foolish Questions and Al Jaffe's Snappy Answers to Stupid Questions. Al has given Rube credit for the original idea, and has even admired Rube, famously calling him  a "superJew."

The basic premise of Rube's influential cartoon panel can be gleaned in a second - a boob asks a question that shows s/he isn't really awake. Just as a Zen master might rap a sleepy student, Rube's characters answer in surreal, sarcastic phrases. Both sides of the formula are funny, and Rube's endless gallery of screwball grotesques make it all work brilliantly.

"Did it ever occur to you what funny questions people ask?" observed Adams one afternoon. "You meet a fellow who's been out of town and say to him, 'Hello, you back again?' On an August day, with the thermometer at 100 even, a man is pushing a lawn mower around the front yard and oozing like a sponge, when some nut comes along and asks, 'Cutting the grass?' "
(from Rube Goldberg: His Life and Work by Peter Marzio, Harper and Row, 1973, p. 45) 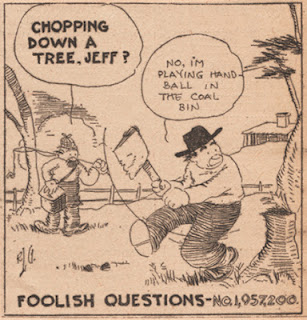 The first Foolish Question was numbered Number 1, and appeared October 23, 1908. Number 2 followed the day. Rube had a hit from the start. Earlier that year, he had emigrated across country from San Francisco after working as a sports cartoonist for about four years. With little experience, no job offer, and the ambition of youth, Rube faced down numerous rejections and landed a job with the sports editor at the new York Evening Mail, beginning a 14-year association that would prove mutually beneficial in a huge way, starting with the runaway success of Foolish Questions.

Between October 1908 and February 1910, the amazingly productive Rube Goldberg wrote and drew over 450 Foolish Question cartoons. Each cartoon featured new characters, a rich cast of extreme figures that are too short, too tall, too fat, too thin. Some with bulging eyes, others with black specks, and still others with inky black round sunglasses. Some hairless, some astonishingly hirsute. Writing in early 1909, Goldberg's fellow Evening Mail staffer, the cartoonist-illustrator Homer Davenport, said, "...funniest of all are the questions and answers of these bald-headed and hump-backed and knock-kneed people."

Here's a scan of a page from a recently acquired scrapbook that offers four Foolish Questions, all circa 1909-10.

The anonymous scrapbooker from a century ago  had a good idea, grouping the panels. Within a year of its creation, Foolish Questions was appearing in newspapers across America, usually in groups of 2 or 3. Foolish Questions gets a 3-to-1 ratio compared to other cartoons in this 1909 edition of a Wisconsin paper.

Included in this set is a panel that is not likely to be reproduced in a collection, interestingly called Foolish, Foolish Questions: 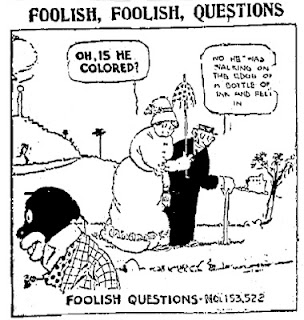 A political conservative, Rube nonetheless was a humanist who believed in every individual's potential for good -- and the racism in his cartoons is no more extreme than what is easily found in most cartoons of the time.

Imitation is the sincerest form of flattery, and Rube's cartoons were so honored. Several imitations sprang up in 1909 and 1910. The McClure Syndicate created Those Ridiculous Questions on January 24, 1909 (the strip ran to Oct 31 of that year). This color Sunday feature sprang up some six months prior to Goldberg's own Sunday version, which started up in July, 1909!

By the way, my primary source for the dates in this article is American Newspaper Comics: An Encyclopedic Reference Guide, Allan Holtz, 2012.

Up to June 20, first strip was written and drawn by the amazing Raymond Ewer, who would later do some amazing work on Slim Jim. An argument can be made here for Rube Goldberg's influence on Ewer, who would go on to create the Goldbergian strip, Things As They Ought To Be. Here's the second strip in  Ewer's Goldberg rip-off series, with his typical elegant pen-work:


The second artist to create Those Ridiculous Questions for McClure was from the less gifted William F. Marriner, who worked on the strip from September 26 to October 31, 1909. Here's one from my own collection, from called Those Ridiculous Questions, which suffers from a common weirdness of comics of the time (but not in Rube's work) where the speech balloons, when read left to right, are out of sequence.

In the comic above, you can see the writer really reaching to match Rube's surreal-sarcastic replies. It's interesting too, that this artist has made fledgling steps towards developing s single character as his particular fount of stoopid questions. Rube never did this -- the concept of his Foolish Questions panel was to show every conceivable type of person asking a dumb question-- underscoring the universality of human idiocy.

The newspaper syndicates must have really loved Goldberg's idea. In February, 1909 a second rip-off, brazenly entitled Foolish Foolish Questions that ran from Feb 14, 1909 to October 3,1909.

Foolish Foolish Questions, drawn by "Sterling" (a house pen-name) and others, was distributed by World Color Printing, which interestingly published Rube's very first Sunday comic, a version of Mike and Ike called The Look-A-Like Boys (1907-1908). I wonder how Rube felt at being ripped-off by an outfit to which he had so recently belonged. Rube never seemed to let failure, rejection, or rip-offs slow him down.

Several months after McClure and World Color Printing launched their versions of the Foolish Questions concept, Rube Goldberg finally got his own version into the Sunday funnies. Starting July 25, 1909, the Chicago Tribune syndicated a 6-block of Foolish Questions for the color Sunday supplements of their subscriber papers. Sometimes the Sunday comic ran as Don't Some People Ask the Biggest Fool Questions?, a title lacking Rube's cadence and wit, and very likely written by a syndicate editor to fill the space.

In 1909, a classy cloth hardcover collection of Foolish Questions appeared, Rube's first book, and one of the very first cartoon collections published in America. Published by Maynard, Small, an Co., the volume is stuffed with reprints of selected favorites and sells for anywhere from $50 to $600 today. Occasionally inscribed copies can be found. The book was dedicated to Franklin P. Adams, the source of the original inspiration. 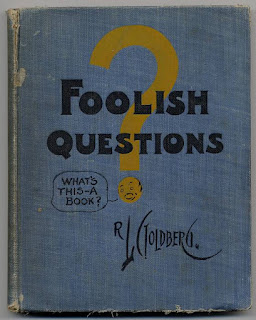 In 1909-circa 1912, Rube Goldberg also penned a new line of color Foolish Questions postcards. Judging by how often these 100-year old items turn up on eBay, a huge number must have been purchased. 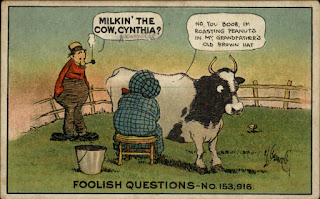 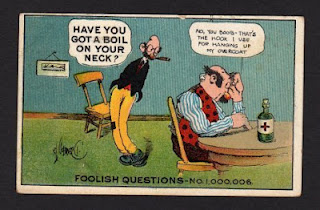 Unscrupulous publishers ripped off the postcard series as well, quite clumsily: 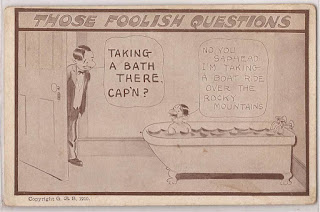 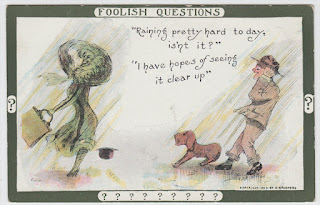 At some point in the nineteen-teens, a Foolish Questions games came out, emblazoned with Rube Goldberg's jaunty, proud signature on the red cover:

Rube drew a figure on the games cover appropriately asked "What's this, a game?" The backside of a different figure asking the same question adorns the back of the cards. The game consists of a deck of cards, each with a different Foolish Question panel on the front. The cartoons were selected reprints, with the questions removed. The game involves correctly guessing the question, perhaps an influence on the game show, Jeopardy. In the example I've scanned above, the question is "Playing with your blocks, Elsie?" Here's the full version of the original cartoon, scanned from my paper collection:


In 1924, the Foolish Questions game was revived in a second edition, with fresh graphics, including a new Rube Goldberg designed cover, with a typically screwball answer: 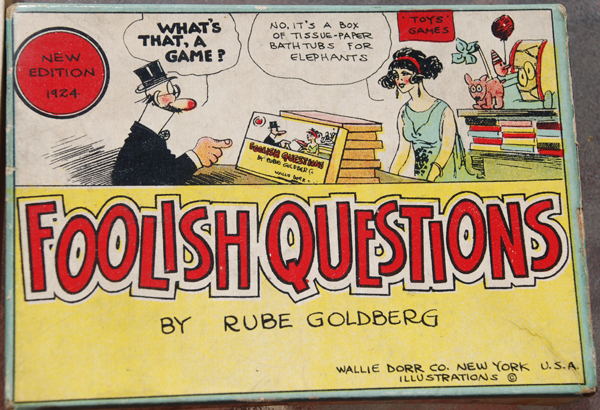 In the summer of 1913, Rube took his first trip to Europe. The Evening Mail paid for the trip, and Rube faithfully mailed back a new cartoon series he called Boobs Abroad (after Mark Twain's European travelogue, Innocents Abroad). As we can see, in this example scanned from my paper collection, Rube integrated Foolish Questions as a panel within the cartoon series, and linked it thematically.

Rube continued to write and draw Foolish Questions until 1934. The series peaked in 1910, and he had a second big hit with I'm the Guy, followed by an astonishing series of inspired cartoon series and panels. Foolish Questions remains a notable standout among Goldberg's many inspired creations. As Homer Davenport admiringly wrote in 1909:

"What a simple creation is a parody, and what a world of reality is there in Goldberg's Foolish Questions series!"

Say, is this the end?
-Paul Tumey