H.M. Bateman and The Speed of Life: Four Cartoons from 1923

Here are four pages of the brilliant English cartoonist H.M. Bateman's cartoons from 1923, scanned from a scrapbook I recently acquired. I believe these are all from the pages of Life, a black and white humor magazine that preceded the more famous photo-based Life Magazine.

As I wrote in an earlier posting on H. M. Bateman (1882-1970), it may be too much of a stretch to classify him as purely screwball, but there's no doubt his work influenced screwball cartoonists. Consider how the the panel I've excerpted above compares to this scene from Harvey Kurtzman and Will Elder's classic "Restaurant!" story from Mad #16 (1954) 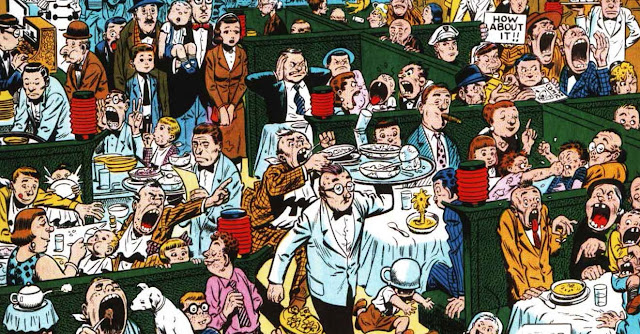 While Elder has created a dense tapestry of sight gags, the basic energy is the same as Bateman's panel. Both cartoonists are saying something about the acceleration of modern life.

There is so much to savor in Bateman's work. Like Milt Gross, each drawing is funny on it's own, but also contributes to a glorious escalation of comedic chaos. Bateman himself said that his cartooning was "going mad on paper."

The four pages in this article are chosen because they all depict people struggling madly to get somewhere, something that was relatively new in 1923. Bateman, who was born in 1882, saw the rise of the automobile. In this cartoon, he chronicles the plight of the pedestrian plagued by motorized vehicles at every turn.

The gag is that our nimble pedestrian is run over by an "out of date vehicle." This cartoon says there's no avoiding change, and if you try, you will suffer. Here's another Bateman, beautifully composed and rendered,  that depicts another battle between a pedestrian and a car-clogged street:

I love the manic, focused -- one might say mad -- look in the pedestrian's face. It requires madness to triumph in a world that turns a man out for a walk into a pedestrian.

Finally, here's an entire group of individuals who have completely adapted to the increased velocity of life. We begin with a group of seven people, all interacting civilly and having a pleasant time. As with William Golding's Lord of the Flies, the trappings of civility are shed when the group must combat each other to survive -- but in the case of the cartoon, they are only competing for a ride on the crowded subway. 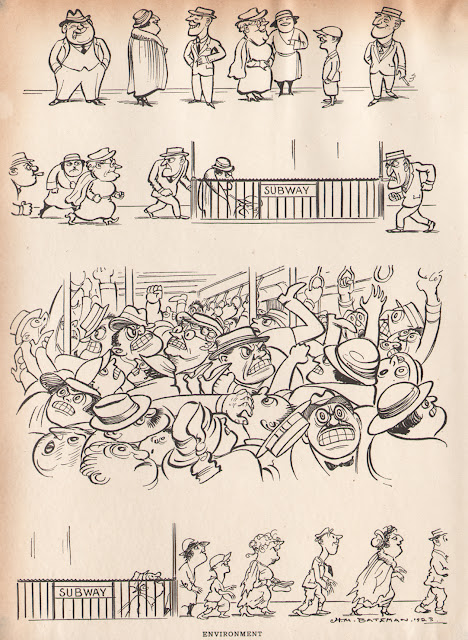 They emerge from the underworld, disheveled but willing to embrace civilization once again. The astonishing  third tier of the subway battle mirrors the energy of a subway train itself, screeching, jolting, careening, speeding through the darkness.

This was the world of London, New York, Boston, or any other major city in 1923.

Today, it seems the speed of life continues to accelerate -- but instead of fighting for our survival like fleeing or fighting animals, we seem to be in a narcotic haze of Internet, TV, sugar, caffeine, alcohol, drugs, memes, constantly looming disaster -- in short, many of us in the big city are subdued, bored, and possibly even depressed. Here's a photo I took while waiting for a subway train in New York City a few weeks ago. 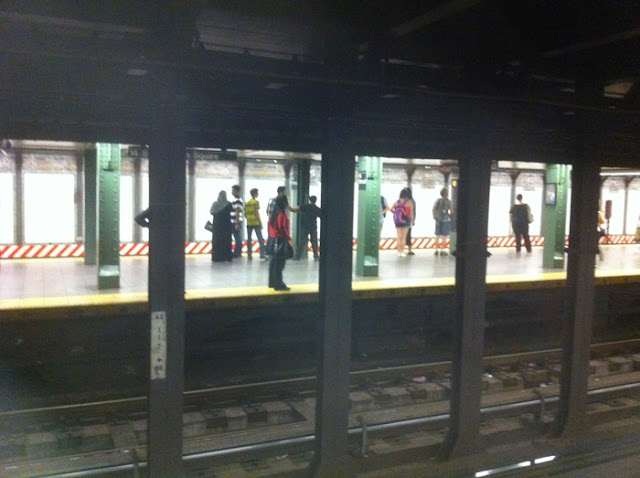 And here's a shot I sneaked on the train -- looked how bored and tuned out the people are: 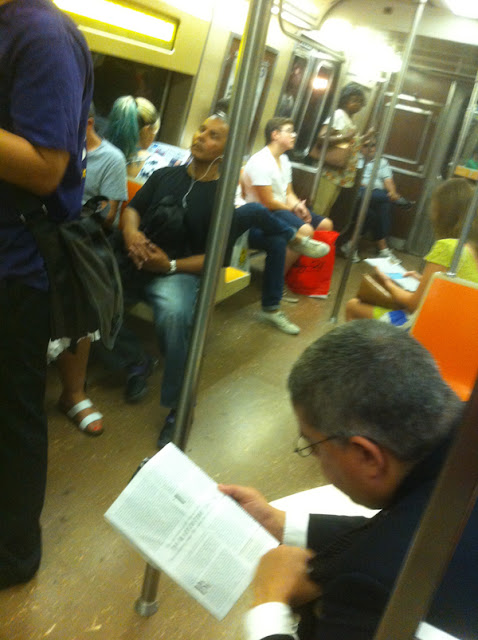 Maybe it was like this for people in 1923. Or 1823. Our time certainly has no claim to being the only era of numbing stress in humanity's history.

Today's last H.M. Bateman cartoon once again revolves around transportation. It depicts the ever increasing happiness of a traveler with some priceless drawings and a beautiful opera of escalation. As our Englishman gets further and further away Canada, he becomes happier and happier. 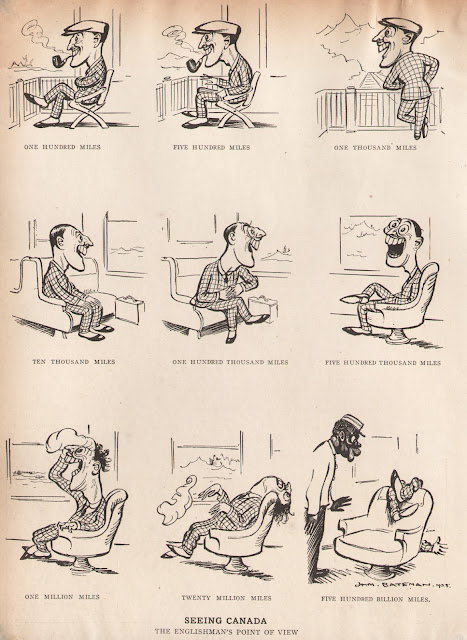 Our traveler has died from happiness! It seems in 1923, Bateman was acutely aware of how technology seemed to aid the human ego in its need to constantly be somewhere else, distracted, and gratified.

In The Man Who Was H. M. Bateman (Webb and Bower, Great Britain, 1982), Anthony Anderson observes:

"Bateman by no means rejected all progress: he thought scientific advance exciting, and, for example, considered the first Moon landing the most wonderful feat of his lifetime - he never stopped talking about it. It was the ugly, leveling, concrete and tarmac side of progress that he hated, and it upset him so much that it was without doubt one of the major factors in his decision to quite England." (p. 202)


Bateman moved to the island of Malta in his later years, where he enjoyed a quite life as a painter. His work was a major influence on Harvey Kurtzman, who in turn influenced scores of important cartoonists and humorists.

Yours in Screwballism,
P.C. Tumey