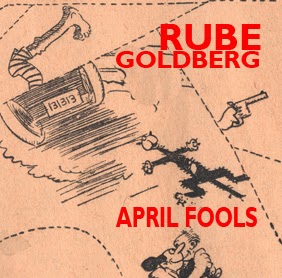 Of all the great American newspaper comic strip cartoonists, Rube Goldberg perhaps most embraced the spirit of the repressed mischievous prankster. It's no surprise that, while Goldberg regularly commemorated national holidays such as Christmas and July 4 (also his birthday) in his daily newspaper comic strip, he seemed to invest extra effort into his strips that ran on April 1, or April Fool's Day -- the day of the prankster.

Goldberg's April 1 strips offered a variety of tongue-in-cheek set ups, including fake cartoons, spurious announcements, and puzzles that, when assembled, formed the words "April Fool." One gets the sense that, while other artists drew strips such as The Katzenjammer Kids about merry jokesters, Rube Goldberg himself was one of those kids!

Being a sensitive person who seemed to like people, Goldberg rarely -- if ever -- stooped to playing practical jokes on others. He might lacerate you with slashes of his comic wit, but he probably wouldn't put salt in the sugar bowl. Instead, he sublimated his impulse to prank into his work, and his April Fool's Day comics often ripped away the facade and laid bare the desire to trick. This can be seen in his April 1st strip of 1914 that makes fun of the common tricks of the day:


Early in his career, Goldberg had been the victim of a cruel practical joke. In 1905, as a newcomer to the staff at the San Francisco Bulletin, the 22-year old cartoonist had been ostracized and hazed by the jaded newspapermen whose ranks he was attempting to join. Rube was assigned the job of attending an evening football game and drawing a cartoon about it for the next day's edition. He carefully prepared his desk top, laid out with his drawing tools and paper so that when he returned  to his office in the early hours of the morning after a long day he could get right to work and do his best. When he returned however, he found his materials inside his desk, which was nailed shut. Something snapped in Rube Goldberg that night. With his jaw set and eyes burning in anger, he nailed shut the desks of everybody in the office. When his co-workers discovered what he had done the next morning, they laughed and suddenly, the young man was one of them.

In his 1920 April Fool's joke, Goldberg made a satirical play on one of his favorite themes, technological progress. He drew a large black spot and told his readers, represented in the strip by a motley crew of slack-jawed boobs, to glue it into the center of a record and stare at it until they could see the "actual face of the person whose voice you hear." His characters, Mike and Ike, in the adjacent panel break through the panel border and comment on the main strip while pointing to the date inscribed below their feet. The strip is a masterful tour de force.


In 1918, Goldberg devoted most of his daily strips to small continuities with his characters Mike and Ike, so its no surprise that they are featured in his April 1 episode. In a set-up worthy of Samuel Beckett, the identical twins are running frantically towards a meeting with the man that draws them. They hope, in a rather deep way, to learn the secrets of their existence, including how to tell themselves apart -- who is Mike and who is Ike? Of course, as it seems to be in real life, the whole thing turns out to be a cosmic gag, but not before we've had a chance to be entertained by a surprisingly clever and artful comic strip.

Perhaps the most literally odd example of an admittedly odd series of comics, Goldberg's April 1, 1919 strip subverted the form by using photographs instead of cartoons. While this parody of beauty may seem a little harsh and uncaring by today's standards, this type of humor was very common in America at this time.

Goldberg's 1921 April Fool's comic was a gentler joke. He repeated this gag again, ten years later, in 1931. Both strips are reproduced in the recent deluxe book THE ART OF RUBE GOLDBERG selected by Jennifer George (Abrams ComicArts, 2013).

While Rube Goldberg often created special comic strips for April 1st (has any other cartoonist so regularly made this day his own?), "An Accident," his April 1, 1915 comic strip, might stand as the best of the lot. The strip, which was printed large at 16 inches across (as was typical for his dailies of the 1910s), is a Cubist deconstruction of the comic strip, with a dozen or so mis-matched parts from a week's worth of strips jumbled together in a bewildering arrangement With his delightful and typical dry-as-dust wit, Rube writes a fake explanation that the strips were dropped and "broken." Despite the bizarre visual chaos of his conceit, the tropes and memes of everyday humor comics can be gleaned from the bits and pieces, making the cartoon an imaginative1915 meta commentary on comics themselves.


All in all, the Rube Goldberg April Fool's Day comic strips represent a delightful and clever assortment of comics by a screwballistic master.

That is All,
Screwpaul Ball
Posted by Paul C.Tumey at 10:51 AM No comments: