GEORGE SWANSON COMICS AND ARTICLES ON THIS BLOG

George Swanson, who signed his name "Swan," was a master of of screwball comics. Starting in the early 20s, Swanson adopted the flip (or plop) take reaction pioneered by Walter Hoban, as well as the funny signs and background details. He took these devices and exaggerated them far beyond any other cartoonist the time. If other screwball comics used these devices at a volume 5, Swanson's was set at 11. 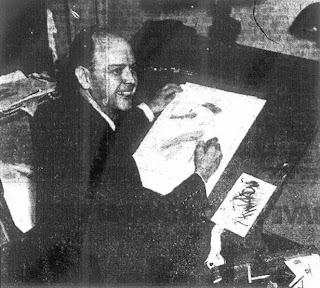 Swanson created his most famous and influential screwball comic, $alesman $am, for the Newspaper Enterprise Association (NEA - also Gene Ahern's first syndicate). It first appeared as a daily on  September 6, 1921, with a Sunday page added in December 1922 (thanks to Bob Foster for this information). Swan drew the strip until around 1927.

The talent-hungry, comics-obsessed William Hearst, who created the first comics syndicate in 1902, saw something special in George Swanson's strip and hired him away from NEA in 1927 to create a copy of his own comic strip, which Swanson called High Pressure Pete.

More on Swanson coming - check back soon. This page is a work in progress!

Occasionally, George Swanson's great-niece offers pieces of his original art for sale on ebay. You can see what's available by clicking here to visit her ebay store. Here are some images from her ebay listings: 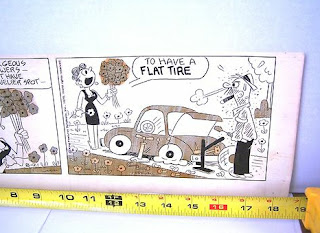 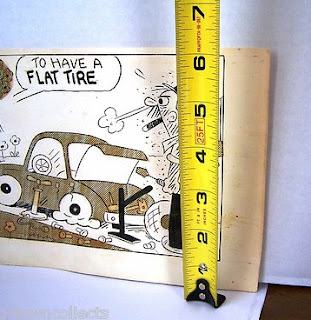 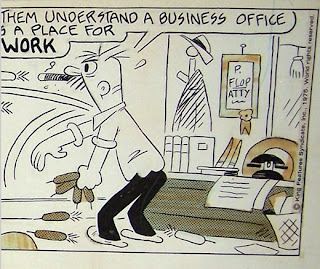 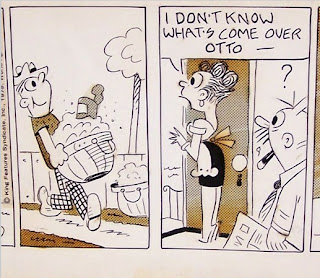 And here's her write-up:


A Original Piece of Daily Art Work
done by my Great Uncle "Swan."

George "Swan" Swanson (1897-1981) was my Great Uncle, who we all referred to as "Uncle Swan."
He always made us laugh and did wonderful drawings on the walls of our family cottage by Lake Erie, in Ohio. Growing up, he gave my family hundreds of these comics and we had so much fun looking at them and sharing them with everyone. Now it's time to pass some of the fun on so others may enjoy them. I have many Flop Family comics to choose from so if you are looking for a joke about something in particular let me know and I will go through them and maybe find one you would enjoy!

George Swanson did other comics as well, Salesman Sam, High Pressure Pete and Officer 6 7/8, and Elza Poppin. Uncle Swan was most known for the Flop Family, later called Dad's Family, which he drew for over 40 years.

Here is an original piece of Art work.
I took detailed pictures for your viewing.
It shows typical aging (which gives it more character ;)
and has some yellowing on the overlays as shown and misc marks on the back.
A great piece for your collection and we are proud to offer it.
Many people buy these comics and frame them.
We ship it safe and secure so no worries there.