Some Great NONSENSE from George Swanson (1928) 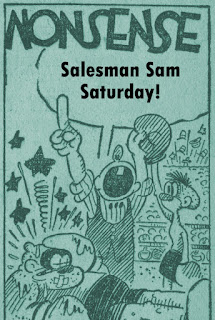 Another cartoonist, Lee Stanley, began Nonsense in 1927 for the Central Press Association syndicate, which also handled Swanson's High Pressure Pete. In 1930, King Features purchased the Central Press Association syndicate, and that is how Swanson wound up working for Heast. Swanson took over the panel in 1928 and drew it until the series ended, in 1937.

Astute observers will note that the examples below, from January, 1928, are signed both by Swan and possibly someone else with the initials "C.P." ATtthis time, the CP signature is a mystery.

The basic concept of Nonsense is very similar to Rube Goldberg's Phoney Films series, which ran sporadically from 1914-1921. The basic idea is to show a scene which is exactly the opposite of a typical human reaction. Here's a couple of undated examples of Phoney Films, circa 1915, scanned from my paper collection:

As you can see in the example above, the scene is anything but true to life, with the kids wanting to stay in school and study arithmetic! Rube's panel simultaneously satirized real life and "reel" life - pointing out how manufactured the reality of movies seemed to him.


Whether Rube Goldberg's Phoney Films panel series had a direct influence on Nonsense, they certainly appear to be cut from the same cloth. Here's a couple on the subject of kid behavior so atypical they are, of course, pure nonsense:

Many (but not all) of the gags appear to have been submitted by readers. Here's Swan on the war between men and women:

The predictable reactionary behavior of businessmen is ripe for comic reversal in the Nonsense series, as well:

As he did in his $alesman $am and High Pressure Pete comics, Swan toss in extra "bonus" gags. Check out the name of the unlikely boxing match winner in this example:

One of the things I treasure about George Swan's comics is the occasional foray into TOTAL screwball nonsense, as shown in the next example, my personal favorite of today's selections:


Thanks to Elaine at Hcollectibles for supplying the Nonsense panels. Be sure to check out their website, if you are looking for old comics: http://www.hcollectibles.com/

Hope you enjoyed this nonsense. I'll be back Monday with a new Milt Gross Monday comic!

I recently stumbled across another panel cartoon with the same mysterious "CP" signature: 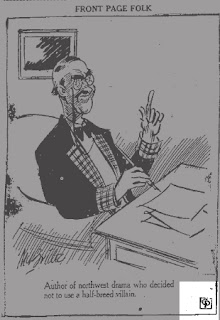 Since this panel also has a prominent signature by the artist, and it has no other indication of which syndicate handled the comic, I think that the CP mark indicates "Central Press" syndicate, which distributed George Swanson's Nonsense. Mystery solved!