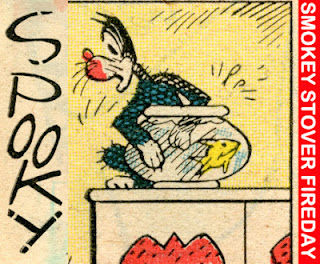 Last week, we looked at Bill Holman's pre-Smokey Stover daily comic strip, Junior (1923-31). This week, I'm sharing with you three 1961 Spooky Sunday single-tier topper strips that are similar in many ways to Holman's Junior. He seems to have shifted back to mining the misunderstandings of small children in these 1961 Spooky comics. They are less about the physical comedy of Spooky and more about the silly wordplay of tykes and tyros. 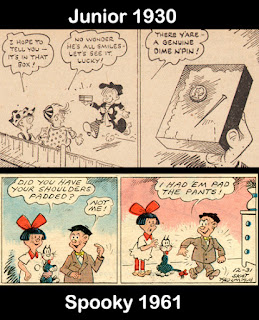 I don't have an explanation for why Holman mined his earlier Junior approach (and probably material) for Spooky, except to wonder if perhaps inspiration was running low for him. Maybe his syndicate asked him to do more kid gags to appeal to younger readers. Despite the Junior-esque feel of Bill Holman' 1961 Spookys, they are still fun to read -- if nothing else for the always appealing drawings of the jowly Spooky himself.


Wondering why does an artichoke*,
Paul Tumey


*apologies to Rube Goldberg, from whose work that gag is stolen