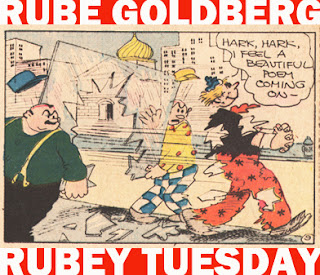 Presenting another terrific standout Boob McNutt Sunday page, scanned from my own paper collection and digitally restored for your amusement and edification!

For years, Pearl and Boob tried unsuccessfully to marry. Something always seemed to happen -- usually a comic disaster of epic proportions. Finally, in 1924, Rube gave in to public demand, and the two married with little fanfare. Although the comedy carried on as always, it felt as if the strip's mainspring had loosened, and the comic lagged. Realizing this, Rube had his two lovebirds quarrel and then fly apart in divorce.

Then, in 1930, Boob once again was smitten by Pearl and proposed a second marriage to her. She said no, and a distraught Boob briefly returned to his comically inept suicide attempts of the first years of the strip (see here for a 1919 "suicide" episode). After getting involved with the Black Paw criminal gang and receiving a big reward for unintentionally capturing them, a flush Boob once again asked Pearl to re-marry him. This time, she said yes --

And here's the incredible result:


A fool in love,
Paul Foomey Tumey
Posted by Paul C.Tumey at 2:00 PM