Fat Tum Tum: Laffs Galore in This 1936 Squirrel Cage/Room and Board Color Page! 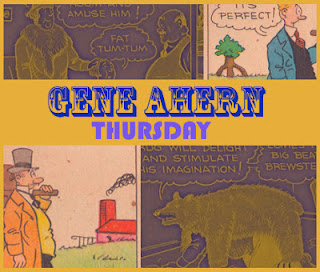 Here's a lovely full page Sunday comic by Gene Ahern from 1936, featuring The Squirrel Cage and Room and Board, scanned from my own collection.

Here we find Ahern in about the fourth month of production on his two new series.

The Squirrel Cage has not yet settled into the conflict with the "Nov shmoz ka pop?" hitch-hiker. It centers around the silly inventions theme that launched the series. Some nice screwball background details are evident, including conducting a radio, and a stairway to nowhere.

The protagonist of Room and Board, the Major Hoople clone named Judge Puffle, is much younger and less careworn in this early episode than he would soon become. Nonetheless, the episode is classic Hoople/Puffle as he can't resist braggadocio even in the company of a toddler. Every time I read "fat tum-tum," I crack up.

Email ThisBlogThis!Share to TwitterShare to FacebookShare to Pinterest
Labels: Gene Ahern: Room and Board, Gene Ahern: The Squirrel Cage, Thursday