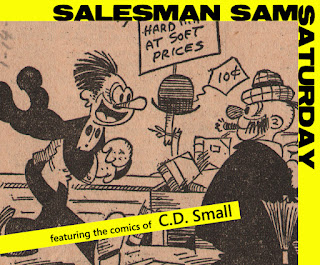 Tossing atcha a trio of beautiful, weird Salesman Sams by C.D. Small, and starting a new screwball game! As readers of this blog already know, C.D. Small took over Salesman Sam (1921-36) in 1926, writing and drawing the strip about twice as long as its creator, George Swanson (who signed his work "Swan").

As I've written before, Swan was the inventor-innovator, and Small was the craftsman who perfected the strip. It's positively uncanny how well Small assimilated Swan's style and continued it for years, rounded panel corners, and all. He even evolved the style slightly in the same direction as Swanson. Was Small simply lifting from Swan's work? I don't think so, since there's a sense of authenticity and integrity in his Salesman Sam comics. Somehow, he made Swan's style his own, and lived and breathed it as a comic strip artist. C.D. Small's work on Salesman Sam is as good, if not better than Swan's!

I'm rolling out a new contest today - SWAN OR SMALL? In the Salesman Sam art below, one panel is by George Swanson (Swan), and one is by C.D. Small. Send me your best guess before next Saturday (Sept. 8), and if you guessed correctly, as a reward, I'll send you a FREE download link for a .cbr file containing an entire month of Salesman Sam strips by Swan from 1924!

Email me now at paultumey@gmail.com! 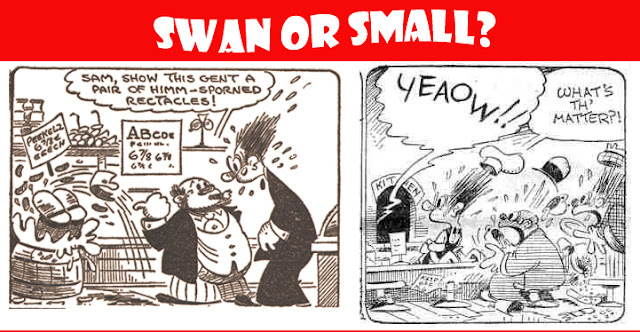 And now, foo your reading pleasure, here's the aforementioned tree screwballies by Smallie, all from 1931! Our first strip starts with mention of a New Year's resolution by Mrs. Guzzlem. This is appropriate, since the strip ran on New Year's Day, 1931. It has a pretty good gag ending, and of course, that swell sleep log in panel one.

Being a book lover, I could hardly resist this next strip. "To cut it short I'll add Longfellow." Snappy dialogue, silly signs, great screwball art, and a decent gag -- what more could ya want, Einstein?


I included this last example because it mentions the Great Depression, which had just begun in 1930 and had a grueling decade to go. This episode begins with Sam and a customer convivially smoking in the store. The no smoking sign in the background has been altered...


Be sure to send in your guess on the new SWAN OR SMALL contest before next Saturday (Sept. 9)!