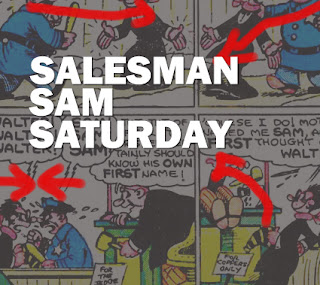 Here's a quick study of how screwball movement works in a classic Salesman Sam strip by C.D. Small.

Part of what makes a comic, a film, or a song screwball is its pattern of movement. Screwballism has a comically agitated, escalated energy. A screwball comic, by it's very nature, invites us to laugh at how worked up we often tend to get about the small details of life. A screwball protagonist in a comic is often the cause of  a chain reaction of chaotic energy release -- most iconically shown in the flip-take, which energetically resolves the build-up in the comic.A good screwball comic artist shapes the movement within the comic so that it has a characteristic signature of chaos.


This example has great energy and movement as Annie breaks out of her prison in the first 3 panels. She's halted in the 4th panel. If we were to trace the pattern of movement in this artwork, it would look something like this:

Movement in sequential comics is conveyed by several factors, including body language, direction of a character's gaze, grouping of figures all facing in one direction, and -- of course -- movement lines. In Harold Gray's masterful strip above, we see a fairly classic adventure comic pattern that moves the eye from left to right until the fourth panel, in which the movement is halted. This, of course, perfectly reflects the action of the story itself.

Here's a Salesman Sam comic from roughly the same period, circa 1936. Read it first for fun, just to absorb it. The joke about Salesman Sam's first name is pretty good, in a corny way.

If you watch a screwball comedy film, the funniest moments will be when the energy of the scene is released in chaos. Consider this image from the famous ship's cabin scene in A Night At The Opera, starring The Marx brothers and made in 1935, around the same time as the comics we are discussing. 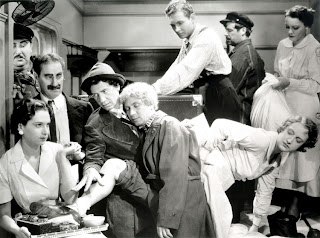 More and more people are crammed into the small space, all moving in different -- unpredictable -- directions. 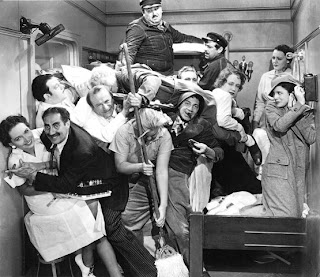 The energy escalates with the addition of manicurists, waiters, stewards, engineers, fellow travelers, etc. All driven by the Marx Brothers, who are oblivious to the chaos they are causing (or perhaps secretly aware of it and enjoying every moment -- a conspiratorial sub-joke that runs as undercurrent in the best screwball comics, films, and music). The screwball scene ends when Margaret Dumont (forever the straight man) opens the cabin door and people come tumbling out in a chaotic and destructive release of the scene's energy. You can watch the entire scene of beautifully orchestrated screwball chaos below:

Moving from film to music, here's a performance by Spike Jones that is analyzed for it's comedic movement by Spike's drummer, Joe Siracusa. In this clip, Joe explains how the scene starts off "straight." Then, there's some comedy drawn from the small movement of the opera singer's belly, emphasized by the well-placed buckle on her dress. From this, the chaotic movement and energy escalates until there's a grand release in which the set is destroyed.

Now, let's take a look at the movement in the Screwball Sam -- unh, I mean Salesman Sam comic.  It begins just like Annie and nearly every other newspaper comic of the time, with left to right movement. By the third panel, Small uses the assemblage of figures and Sam's pose to direct the energy and the eye down to the next tier... 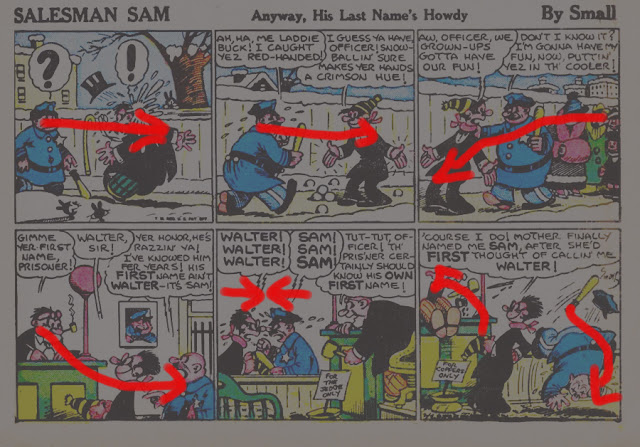 ... and here, at the left-hand side of the lower tier, we have a swooping left to right movement. The fifth panel is where the conflict occurs, as Sam and the policeman argue face-to-face. The last panel is the chaotic, multi-directional, explosive release of the pent-up agitated energy. Where the movement and energy in the Annie strip is logical and tells a hero's story of challenge, our screwball strip has unpredictable movement and tells a story of insanity -- and that, my friends, is the signature movement of a sequential screwball comic!

Till Next Time,
Screwball Paul
Posted by Paul C.Tumey at 12:26 PM